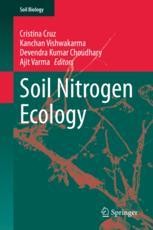 This book highlights the latest discoveries about the nitrogen cycle in the soil. It introduces the concept of nitrogen fixation and covers important aspects of nitrogen in soil and ecology such as its distribution and occurrence, soil microflora and fauna and their role in N-fixation. The importance of plant growth-promoting microbes for a sustainable agriculture, e.g. arbuscular mycorrhizae in N-fixation, is discussed as well as perspectives of metagenomics, microbe-plant signal transduction in N-ecology and related aspects.

This book enables the reader to bridge the main gaps in knowledge and carefully presents perspectives on the ecology of biotransformations of nitrogen in soil.

Prof. Cristina Cruz is a faculty at Plant Biology,  Faculty of Sciences of the University of Lisbon (Faculdade de Ciências da Universidade de Lisboa - FCUL), Portugal, where she is teaching and carryout research since 1994. She teaches in the Department of Plant Biology (Departamento de Biologia Vegetal - DBV), and carry out research in the Plant-Soil Ecology Group of the Centre for Ecology, Evolution and Environmental Changes (cE3c). She is interested in the physiological mechanisms that determine the suitability of terrestrial plants to their environments, especially in environments rich in ammonium. Prof Cruz is actively engaged in research and has coordinated several research projects funded by National Science Foundation, IMM, European Space Agency, Portuguese Science and Technology Foundation and many more. She has more than 100 research publications in scientific journals and around 40 book chapters with Backhuys Publishers, Oxford and IBH Publishing, Springer, Nova Science Publishers, and European Science Foundation and Springer verlag, Germany. She is also a Consultant to the European Commission as an external expert evaluator of projects and progress reports with significant experience as scientific referee and examiner.

Dr. Kanchan Vishwakarma is currently working as Research Scientist at Amity Institute of Microbial Technology, Amity University Noida. She has completed her MTech and PhD from Motilal Nehru National Institute of Technology Allahabad, the Institute of National Importance. Her broad area of interest includes assessment of plant physiology under stress, plant microbe interaction and plant nanoparticle interaction. She is majorly engaged in studying the role of beneficial microbes such as plant growth promoting rhizobacteria and nanoparticle’s interaction to eradicate stress in various crops.. She is recipient of Gold Medal and Merit Certificate for her MTech dissertation in 2015 and a prestigious Tony B Academic Award which was presented to her by Society for Laboratory Automation and Screening (SLAS), USA in Feb 2019. She has published many research and review articles in peer reviewed international journals and several book chapters of Springer Nature and Academic Press Elsevier. Dr Vishwakarma is a member of American Society for Microbiology (ASM) and an active reviewer of reputed journals like Environmental and Experimental Botany, Journal of Hazardous Materials, Plant Physiology and Biochemistry, Plant Gene, Journal of Plant Growth Regulation to name a few.

Dr. Devendra Kumar Choudhary is a member of the National Academy of Sciences (MNASc), India. Recently, his name included among the top two per cent scientists in a global list compiled by the prestigious Stanford University that published in PLoS Biology Journal. He is active researcher and operated major projects with worth amount 10 million sponsored by DBT, DST and SERB, New Delhi, India. He has involved and contributed in National Academy of Agricultural Sciences (NAAS) policy paper number 36 in the year 2006. He has published more than 88 publications for reputed journals like Springer, Elsevier, Taylor Francis & Wiley-Blackwell. He has guided 10 scholars for their doctoral programme and guiding several more. In addition, he is recipient of visiting and teacher research fellowship-2014 offered by Indian National Science Academy (INSA), New Delhi. His team received DR. RS Rana Memorial best research award 2013 sponsored by Association of Microbiologists of India. His team submitted bacterial strain to public domain and incurred two accession numbers from MTCC, IMTECH for submitted bacterial cultures (MTCC, 12057 & 12058) along with one MCC no 2607. In recent times, he has edited 14 books for Springer and filed three patents to India Patent Office, New Delhi.

He has successful supervised over 109 Ph.D. students and one D.Sc. student. He has published over 450 research articles, which appeared in National and International, journals of repute and also several major review articles and chapters in books, published 114 books in the area of Microbial Technology, published by Academic Press, London, CRC Press, Florida, USA, IDRC, Canada and Springer-Verlag, Germany. Nominated as Editor-in-Chief by Springer-Verlag (Germany & New York), the leading science-publishing house, to prepare volumes on Soil Biology. Nominated as Editor-in-Chief by IK Internationals to make series of books on Microbial and Biotechnological Research, Academic Editor - ‘International Journal of Plant & Soil Science.