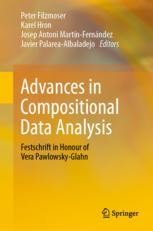 Festschrift in Honour of Vera Pawlowsky-Glahn

Peter Filzmoser is a Professor of Statistics at the Vienna University of Technology, Austria, where he received his PhD and postdoctoral lecture qualification. He has been a Visiting Professor in Toulouse, France and Minsk, Belarus. Furthermore, he has authored more than 200 research articles and several R packages and has co-authored books on compositional data analysis (Springer, 2018), on multivariate methods in chemometrics (CRC Press, 2009) and on analysing environmental data (Wiley, 2008).

Karel Hron is a Professor at Palacký University in Olomouc, Czech Republic. He holds a PhD in Applied Mathematics from the same university. His research chiefly focuses on the statistical analysis of compositional data (CoDa) and applications of CoDa methodologies. Further, he has developed methods for CoDa that have since been implemented in the R software. He has authored more than 100 research articles and co-authored a book on compositional data analysis (Springer, 2018).

Josep Antoni Martín-Fernández is a Professor at the Department of Computer Science, Applied Mathematics and Statistics, University of Girona, Spain. His interests primarily lie in the analysis of compositional data (CoDa), and he has released more than one hundred publications related to the topic. He is the principal investigator of the CoDa Research Group, where he pursues publicly funded research projects on CoDa. He has also taught many CoDa courses.

Dr Javier Palarea-Albaladejo is a Principal Statistical Scientist at Biomathematics and Statistics Scotland, Edinburgh, UK, where he provides high-level statistical inputs for interdisciplinary scientific research, and engages in methodological research and training with a focus on multivariate and compositional data analysis. He has published over 70 peer-reviewed articles in scientific journals, created two R packages, and led the statistical component of grants supported by various funders.