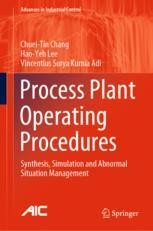 Process Plant Operating Procedures presents an introduction to the theory and applications of procedure synthesis that is primarily concerned with the task of conjecturing the sequence of controller (or operator) actions needed to achieve designated operational goals in a given system. In order to facilitate practical implementation, the formal problem statement, two alternative approaches, their validation methods and a series of realistic examples are provided.

The authors explore Petri nets and automata to identify the best paths leading to the specified goal of operation. The model-building methods for characterising all components in the given system, as well as the required control specifications, are explained with simple examples. The sequential control actions and the corresponding time schedule can then be identified accordingly.

This book exposes practitioners to an important area of plant operations, teaching them effective approaches for procedure synthesis, enabling them to construct and solve scheduling models, and providing them with tools for simulation and validation of procedures and schedules. It is written for readers with a basic understanding of process design and control activities, and it will appeal to engineers in diverse fields with an interest in synthesizing operating procedures in process plants.

Chuei-Tin Chang received his BS degree in Chemical Engineering from National Taiwan University and his PhD in Chemical Engineering from Columbia University in 1976 and 1982, respectively. He worked as a process engineer for FMC Corporation (Princeton, New Jersey) from 1982 to 1985 and as an assistant professor at the Department of Chemical Engineering at the University of Nebraska (Lincoln) from 1985 to 1989. He later joined the faculty of Chemical Engineering Department of the National Cheng Kung University (Tainan, Taiwan) in 1989, became a full professor in 1993, and also received the Distinguished Professor Award (2008-2011). He was a visiting research scholar at Northwestern University (1992), Leihigh University (1998), and Georgia Institute of Technology (2006). He is a senior member of AIChE and TwIChE. His current research interests are mainly concerned with process systems engineering (PSE), which include process integration, process safety assessment and fault diagnosis, etc. He is the author of 1 monograph, 114 peer-reviewed papers and 98 conference papers.

Hao-Yeh Lee is a professor in Department of Chemical Engineering at National Taiwan University of Science & Technology (Taiwan Tech.)(Taipei, Taiwan). He received his BS and MS degrees in Chemical and Materials Engineering of the Chang Gung University in 1998 and 2000. In 2007, he completed his Ph.D degree and was a Postdoctoral Fellow in the Institute of Chemical Engineering at National Taiwan University (NTU). He is the lecturer of Consortium of Reaction/Separation Processes in the Petrochemical Research Center of National Taiwan University since 2006. He worked with Advanced Control & Systems Inc. (Taipei, Taiwan) before joining Taiwan Tech. in 2010. From 2011 to 2020, He was an assistant and associate professor in Chemical Engineering Department of Taiwan Tech.. Later, He became a full professor in 2020. His research interests include process design, control, optimization and energy integration, etc., especially in the azeotropic and reactive distillation processes. He is the author of 4 book chapters, 45 published papers and 41 conference papers.