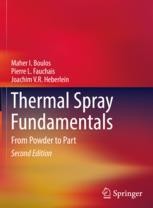 From Powder to Part

This fully revised, industry-standard resource offers practical details on every aspect of the fundamentals necessary for understanding thermal spray technology, from powder all the way to the final part. The second edition is presented in a reader-friendly format that is split into four parts. Part I presents a review of thermal spray coating and its position in the broad field of surface modification technologies. Highlights of combustion and thermal plasmas are given with an expanded treatment of in-flight plasma-particle interactions. The second and third parts deal respectively with an updated presentation of thermal spray technologies and coating formation, including solution and suspension plasma spraying. The last part of the book includes a comparative analysis of different thermal spray processes, which is essential for the optimal selection of the appropriate thermal spray process in a given application. Coverage of system integration has been expanded with the addition of a detailed discussion of online instrumentation and process diagnostics and numerous examples of industrial scale spray booth designs. Attention is also given to coating finishing and health and safety issues. An extensive review is presented of thermal spray applications grouped in terms of process objectives and present use in different industrial sectors. This book will serve as an invaluable resource as a textbook for graduate courses in the field and as an exhaustive reference for professionals involved in the thermal spray field.

Maher I. Boulos, Professor Boulos is professor emeritus at the chemical engineering and Biotechnology Engineering Department of the University of Sherbrooke, in Sherbrooke, Québec Canada.  He obtained his bachelor’s degree in chemical Engineering from Cairo University, Egypt 1963, and Master’s and Ph.D. degrees from the University of Waterloo, Ontario, Canada in 1968 and 1972. He has a long experience in the areas of fluid dynamics and heat and mass transfer under plasma conditions. He has been at the University de Sherbrooke since 1973 where he founded the Plasma Technology Research Center in 1985. In 1990, he founded Tekna Plasma Systems Inc., a spin-off the University of Sherbrooke with the mandate of developing and promoting industrial applications of thermal plasma technology. Since January 2007 he retired from his regular faculty position to focus on running the Tekna Group which has grown to be a world leader in induction plasma technology. Over his 35 years career at the University of Sherbrooke, Professor’s Boulos supervised/co-supervised 57 M.Sc. and Ph.D. students, published more than 150 papers in refereed scientific Journals, more than 200 International conference proceedings, and contributed to 35 patents and patent applications. He coauthored a textbook on thermal plasma fundamentals and applications, published by Plenum in 1994 and numerous chapters in textbooks. He is a Fellow of the Canadian Academy of Engineering and has been the recipient of numerous distinctions including TSS Hall of Fame in 2003 and the “Lieonel Boulet” Prix du Québec in November 2007, the highest scientific distention in Québec, for his contribution to scientific and economic development in Québec.

Pierre L. Fauchais, Pierre Fauchais is a professor emeritus at University of Limoges, France. He received at the University of Poitiers, France, his Diplomas both in Engineering: Aeronautics and related Thermal Problems (1961) and in Physics (1961), his Ph.D. in Mechanics and Aeronautics (1963), and his State Thesis in Physics (1968). From 1961 to 1968 he was Researcher at National Research Centre (CNRS) at ENSMA Poitiers, and in 1968 became Assistant Professor at the University of Limoges, then Full Professor in 1973, and Exceptional Professor in 1988. His work was devoted to thermodynamic and transport properties of thermal plasmas, arc technology, plasma diagnostics (temperatures and velocities), sensors for particles in flight and at impact (laser anemometry, fast pyrometers (50 ns), and imaging, plasma spraying, and production of finely or nanostructured coatings. He has about 400 papers published, 9 book chapters, one book, 280 peer-reviewed international conference papers, 430 international conference papers, and 8 patents. He has given 52 plenary lectures and 82 topical lectures at international meetings. He was inducted to the ASM-TSS Hall of Fame in 1998 and received the Plasma Chemistry Society award in 2001 and 34 best paper awards. He is fellow ASM since 2002. He has directed or codirected 92 Ph.D. thesis and 15 State thesis or equivalent (HDR). Besides regular teaching, he has given and organized numerous continuing education short courses in conjunction with international conferences and specialized courses adapted to industrial needs.

Joachim V. R. Heberlein, Professor J. V. R. Heberlein received the Diploma in Physics from the Technical University Stuttgart, Germany, and the Ph.D. degree in Mechanical Engineering from the University of Minnesota in 1966 and 1975, respectively. From 1975 to 1989 he was at the Westinghouse R&D Center involved in a variety of plasma-related applications, first as senior engineer in Power Interruption Research and then as manager of Lamp Research, Applied Plasma Research, and Nuclear and Radiation Technology. Since 1989 he has been at the Mechanical Engineering Department at the University of Minnesota working in the areas of plasma heat transfer, electrode effects, plasma instabilities, and various plasma process developments. In particular he has described arc plasma effects theoretically and numerically and performed experimental verifications for a variety of applications, including plasma spray torch development and plasma cutting. He has over 330 published papers, 7 book chapters, and 14 patents issued and has received a number of awards and distinctions and inducted to TSS Hall of Fame in 2004.