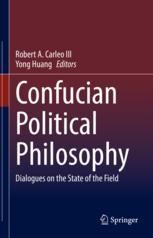 Dialogues on the State of the Field

This book debates the values and ideals of Confucian politics—harmony, virtue, freedom, justice, order—and what these ideals mean for Confucian political philosophy today. The authors deliberate these eminent topics in five debates centering on recent innovative and influential publications in the field. Challenging and building on those works, the dialogues consider the roles of benevolence, family determination, public reason, distributive justice, and social stability in Confucian political philosophy. In response, the authors defend their views and evaluate their critics in turn. Taking up a broad range of crucial issues—autonomy, liberty, democracy, political legitimacy, human welfare—these author-meets-critic debates will appeal to scholars interested in political, comparative, and East Asian philosophy. Their interlaced themes weave a portrait of what is at stake in discussing Confucian values and theory. Most importantly, they engage and develop the state of the field of Confucian political philosophy today.

Robert A. Carleo III (M.Phil. Chinese Philosophy, Fudan University; Ph.D. Philosophy, The Chinese University of Hong Kong) works principally on comparative and Chinese moral and political theory. His writing can be found in Philosophy East and West, Asian Studies, Dao: A Journal of Comparative Philosophy, and Journal of World Philosophies, as well as on Bloomsbury Academic and Open Court Press. His translations of Chinese philosophy have been published by Harvard University Press, Brill, Taylor and Francis, and Springer, one of which was selected as an Outstanding Academic Title of 2019 by the American Library Association’s Choice magazine.

Yong Huang, Professor, The Chinese University of Hong Kong, is founding editor of Dao: A Journal of Comparative Philosophy and of Dao Companions to Chinese Philosophy, the first-ever companion series exclusively focused on Chinese philosophy. He has founded several other book series, as well, including the ACPA Series in Chinese and Comparative Philosophy, and has served as co-chair of the Confucian Tradition Group of American Academy of Religion, co-chair of the University Seminar on Neo-Confucian Studies at Columbia University, and President the of Association of Chinese Philosophers in America. In addition, he sits on almost 20 editorial boards of scholarly journals and book series in both English and Chinese. With interests in both philosophy and religion in both Western and Chinese traditions, his research focuses on ethical and political issues from an interdisciplinary and comparative perspective.