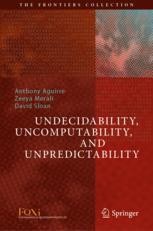 For a brief time in history, it was possible to imagine that a sufficiently advanced intellect could, given sufficient time and resources, in principle understand how to mathematically prove everything that was true. They could discern what math corresponds to physical laws, and use those laws to predict anything that happens before it happens. That time has passed. Gödel’s undecidability results (the incompleteness theorems), Turing’s proof of non-computable values, the formulation of quantum theory, chaos, and other developments over the past century have shown that there are rigorous arguments limiting what we can prove, compute, and predict. While some connections between these results have come to light, many remain obscure, and the implications are unclear. Are there, for example, real consequences for physics — including quantum mechanics — of undecidability and non-computability? Are there implications for our understanding of the relations between agency, intelligence, mind, and the physical world?

This book, based on the winning essays from the annual FQXi competition, contains ten explorations of Undecidability, Uncomputability, and Unpredictability. The contributions abound with connections, implications, and speculations while undertaking rigorous but bold and open-minded investigation of the meaning of these constraints for the physical world, and for us as humans.​