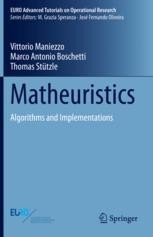 This book is the first comprehensive tutorial on matheuristics. Matheuristics are based on mathematical extensions of previously known heuristics, mainly metaheuristics, and on original, area-specific approaches. This tutorial provides a detailed discussion of both contributions, presenting the pseudocodes of over 40 algorithms, abundant literature references, and for each case a step-by-step description of a sample run on a common Generalized Assignment Problem example. C++ source codes of all algorithms are available in an associated SW repository.

Vittorio Maniezzo is a Full Professor of Computer Science at the University of Bologna, Italy. He has been working on heuristic algorithms for combinatorial optimization for decades, first contributing to the original design of ant system optimization, and then establishing the area of matheuristics. His research interests include operational analytics, combining matheuristics with predictive modules.

Marco Antonio Boschetti is an Associate Professor at the Department of Mathematics, University of Bologna, Italy. He holds an Msc in Computer Science from the University of Bologna and a PhD in Operational Research from the Management School, Imperial College, London, UK. His main research and consulting interests include quantitative methods for management science. In particular, he works on exact and heuristic solution methods based on mathematical programming and combinatorial optimization approaches.

Thomas Stützle is a Research Director at the Belgian F.R.S.-FNRS, working at the IRIDIA laboratory of Universitélibre de Bruxelles (ULB), Belgium. He is the co-author of two books, Stochastic Local Search: Foundations and Applications and Ant Colony Optimization, both of which are the main reference sources in their respective areas. His research interests include metaheuristics and stochastic local search, swarm intelligence, methodologies for engineering stochastic local search algorithms, multi-objective optimization and the automatic configuration of algorithms.
Show all