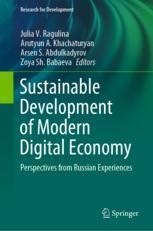 Julia V. Ragulina, professor, Head of the Chair of compliance and controlling at RUDN University (Russian Federation). She is the honored worker of science and technology of the Russian Federation and the honored worker of higher professional education. She is the author of more than 200 publications and a range of monographs on state control and audit, state and municipal management, and economics of municipal entities (including monographs with co-authors from Harvard University, USA).

Arsen S. Abdulkadyrov, associate professor, chief scientific officer at Research Institute of Management, Economics, Politics, and Sociology of Dagestan State University of National Economy (Russian Federation). He is the author of more than 100 scientific works, including 5 monographs. His scientific interests include economics of hi-tech production, digital economy, analysis and modeling of economic processes in the fuel and energy complex, and economic and national security.

Zoya Sh. Babaeva, associate professor at Dagestan State University of National Economy in Economics (Russian Federation). She is the author of more than 110 scientific works, including 3 monographs. Her scientific interests include financial accounting and analysis and audit. She is a member of editorial boards of several leading economic journals of Russia.