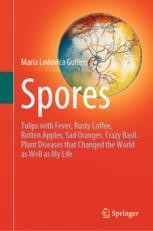 This book aims to describe, though in a quite light way, the social role of plant diseases, letting the reader know the topical importance of plant pathology, as well as the role of plant pathologists in our society. Plant diseases caused, in the past, significant economic losses, deaths, famine, wars, and migration. Some of them marked the history of entire countries. One example among many: the potato late blight in Ireland in 1845.  Today plant diseases are still the cause of deaths, often silent, in developing countries, and relevant economic losses in the industrialized ones.

This book, written with much passion, neither wants to be a plant pathology text. On the contrary, it wants to describe, in simple words, often enriched by the author's personal experience, various plant diseases that, in different times and countries, did cause severe losses and damages. Besides the so-called “historical plant diseases”, in the process of writing this book, she wanted to describe also some diseases that, though not causing famine or billions of losses, because of their peculiarity, might be of interest for the readers.

Thus, this book has not been conceived and written for experts, but for a broader audience, of different ages, willing to learn more about plant health and to understand the reasons why so many people in the past and nowadays choose to be plant pathologists. This is because plants produce most of the food that we consume, that we expect to be healthy and safe, and because plants make the world beautiful.  The title “Spores” is evocative of the reproduction mean of fungi. Spores are small, light structures, often moving fast. The chapters of this book are short and concise. Just like spores!

Maria Lodovica Gullino was born in Saluzzo, Italy, of which she is very proud; Maria Lodovica Gullino since the late 1970s with great concreteness and passion has been carrying out research on horticultural crop diseases at the University of Torino, where she is Full Professor in Plant Pathology and Vice-Rector for the valorization of human and cultural resources.  Daughter of agricultural entrepreneurs and entrepreneur herself, she lived and worked for long periods abroad. When she is not travelling, she lives in Torino, where she directs Agroinnova, the Centre of Competence for the innovation in the agro-environmental field, that she established at the University of Torino in 2002. She has travelled the world far and wide, leaving each time with a small suitcase half empty and then full of stones – precious or not ¬– and coloured fabrics at the return. As a journalist, she loves to read and write. After more than 1,000 scientific papers and many books, including the series “Plant Pathology in the 21st Century” (Springer, 2009–2020), she wanted to try her hand at a lighter writing. She started with “Spore” (Daniela Piazza Editore, 2014), followed by a children’s book in 2015, “Caccia all’alieno” (Alien hunt), on alien pathogens threatening fruit and vegetable crops, and in 2016, “Valigie: cervelli in viaggio” (Suitcases: brains on the move), edited by the same publisher. In 2018, she wrote “Angelo, il Dottore dei  Fiori” (Dr Flower), the story of Professor Angelo Garibaldi, Researcher and Co-Founder of Agroinnova, illustrated by Gabriele Peddes and published by Edagricole, Business Media. Adapted also for the theatre, this book has offered the opportunity to make even the youngest ones aware of the fascination of research on plant diseases. For the International Year of Plant Health, she wrote another book for children, entitled “Healthy plants, healthy planet” (FAO), translated into several languages.