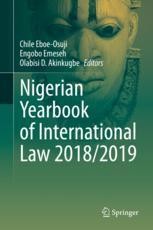 The contributions to this volume focus on a diverse array of topics in international law, with scholarly interventions from experts in the field, both in academia and the judiciary, as well as case commentary on a recent decision of the International Court of Justice (Chagos Decision). The theoretical and methodological breadth of the issues covered are relevant to audiences beyond the Nigerian and African intellectual space. In particular, this volume includes analysis on critical intellectual property law questions; intersections of national, regional and international law and technology; the African Continental Free Trade Area Agreement; and maritime law. The authoritative views of the experts on the different issues covered in this volume make excellent contributions to their relevant fields.

Chile Eboe-Osuji, LLB, LLM, LLD, is the President of the International Criminal Court since 11 March 2018. Prior to joining the ICC, Judge Eboe-Osuji was the Legal Advisor to the UN High Commissioner for Human Rights, during which time he anchored the High Commissioner's interventions in cases involving human rights questions. In that capacity, he led the writing of amicus curiae submissions to the European Court of Human Rights and the United States Supreme Court. He served as principal appeals counsel for the Prosecution in the Charles Taylor Case at the Special Court for Sierra Leone, and has held several posts at the International Criminal Tribunal for Rwanda, including Head of Chambers and Lead Prosecution Trial Counsel.

He practiced law as a barrister before trial courts in Nigeria and Canada; and conducted appeals before the Court of Appeal for Ontario (Canada) and the Supreme Court of Canada.

Judge Eboe-Osuji taught international criminal law as adjunct professor at the Faculty of Law of the University of Ottawa. He served as legal expert to Nigeria's delegation to the ICC-ASP Special Working Group on the Definition of the Crime of Aggression.

Engobo Emeseh, LLB, LLM, MSc, PhD is Head of Law School, University of Bradford. She has extensive experience in higher education both within and outside the UK. Professor Emeseh has led the development of innovative market relevant degree schemes, portfolio reviews, and diversification of delivery formats to cater to a wide audience, maximise resources, and improve the student learning experience, including external engagement and skills development. Engobo obtained her PhD from the Centre for Energy Petroleum and Mineral Law and Policy, University of Dundee.  She graduated with a first class from the Nigeria Law School and Distinction from the University of Wales Cardiff. She is a former British Council Chevening Scholar, and a Ford Foundation (IFP) doctoral fellow. Prior to her academic career, she practiced as a barrister and solicitor in Nigeria, having been called to the Nigerian Bar.