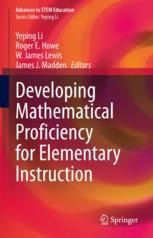 The need to improve the mathematical proficiency of elementary teachers is well recognized, and it has long been of interest to educators and researchers in the U.S. and many other countries. But the specific proficiencies that elementary teachers need and the process of developing and improving them remain only partially conceptualized and not well validated empirically. To improve this situation, national workshops were organized at Texas A&M University to generate focused discussions about this important topic, with participation of mathematicians, mathematics educators and teachers. Developing Mathematical Proficiency for Elementary Instruction is a collection of articles that grew out of those exciting cross-disciplinary exchanges.

Developing Mathematical Proficiency for Elementary Instruction is organized to probe the specifics of mathematical proficiency that are important to elementary teachers during two separate but inter-connected professional stages: as pre-service teachers in a preparation program, and as in-service teachers teaching mathematics in elementary classrooms. From this rich and inspiring collection, readers may better understand, and possibly rethink, their own practices and research in empowering elementary teachers mathematically and pedagogically, as educators or researchers.

Yeping Li is Professor of Mathematics Education at Texas A&M University, USA, where he served as the Head of the Department of Teaching, Learning, and Culture from 2011 to 2015. His research interests include mathematics education, STEM education, and teacher education. He is the founding editor-in-chief of the International Journal of STEM Education and Journal for STEM Education Research, both published by Springer, and is also the editor of several monograph series including, Advances in STEM Education also published by Springer. In addition to publishing over 15 books and special journal issues in recent years, he has published more than 150 articles in topic areas that he is interested in. He has also organized and chaired many group sessions at various national and international professional conferences, such as International Congress on Mathematical Education -10 (ICME-10) (2004), ICME-11 (2008), ICME-12 (2012), and American Educational Research Association. He received his Ph.D. in Cognitive Studies in Education from the University of Pittsburgh, USA.

Roger E. Howe is Wm. Kenan Jr. Professor of Mathematics, emeritus, from Yale University, and the Curtis D. Roberts Professor of Mathematics Education, and University Distinguished Professor at Texas A&M University, USA. His scholarly interests include mathematics and mathematics education, with a focus on conceptual understanding and teacher preparation. He served on the Study Committee of the National Research Council that produced Adding It Up. He was Chair of the Committee on Education for the American Mathematical Society, 2000-2004. He was a member of the reaction group for the creation of the Common Core State Standards in Mathematics for the United States. He served on the U.S. National Commission on Mathematics Instruction from 2008-2016, and on Executive Committee of the International Commission on Mathematics Education of the International Mathematical Union, 2010 - 2016. He helped to plan ICMI Study 23, on whole number arithmetic. He has been a member of the Editorial Board of the Springer Undergraduate Texts in Mathematics since 2012. He received his Ph.D. in Mathematics from the University of California, Berkeley.

W. James Lewis is Aaron Douglas Professor of Mathematics at the University of Nebraska-Lincoln, USA, where he has served as chair of the Department of Mathematics and currently serves as Director of the Center for Science, Mathematics and Computer Education and Director of STEM Education Research Initiatives. Lewis was chair of the writing team for The Mathematical Education of Teachers II, and a member of the writing team for the Standards for Mathematics Teacher Preparation published by the Association for Mathematics Teacher Educators. From 2015 to 2018 he worked at the National Science Foundation (NSF), serving first as Deputy Assistant Director and then as Acting Assistant Director for NSF’s Education and Human Resources Directorate. His research interests include mathematics education and teacher education.

James J. Madden is Patricia Hewlett Bodin Distinguished Professor of Mathematics at Louisiana State University (LSU), USA, Director of Special programs in the LSU College of Science and Associate Director of the Gordon A. Cain Center for STEM Literacy.  In 2007, Madden launched a new track of the College of Science Master of Natural Science (MNS) Program for secondary STEM teachers, now called LaMSTI, or the Louisiana Math and Science Teacher Institute.  This program has served nearly 200 Louisiana teachers, of whom over 150 have earned the MNS degree.  Madden has over 20 years of experience in developing curricula for professional development.  He advised the secondary Eureka Math curriculum and he has published scholarly work the history of the mathematics curriculum.