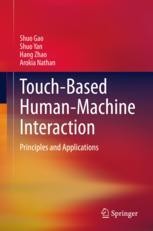 This textbook presents a comprehensive treatment of touch technologies, explaining current mainstream and new contact/non-contact based human-machine interactivity (HMI) techniques, which are ubiquitous in modern electronic devices and allow machines to exchange information with users in an efficient and reliable manner. The book provides a detailed study of HMI working principles and practical product examples. Haptic, which has become essential for users to gain immersive experience, is also discussed. The book concludes with an overview of novel applications enabled by emerging technologies, such as advanced materials, virtual reality and machine learning, providing a roadmap for possible development trends for touch interactivities. The book can be used as a graduate text for students in display and touch interface technology courses in electrical and computer engineering, and a professional reference for researchers, practicing engineers, and product designers working in broad areas of engineering.

Shuo Gao received his PhD in electrical engineering from the University of Cambridge, Cambridge, UK. He is currently an Associate Professor at the Beihang University (formerly known as Beijing University of Aeronautics and Astronautics), Beijing, China. Prior to that, he was a Research Associate with the University College London, London, UK. His area of expertise is human-machine interactive systems. Dr. Gao has published over 50 articles, including peer-reviewed journals and flagship conferences, and filed/awarded more than 30 US, UK and CN patents. He serves on technical committees in various capacities. He was a recipient of a China Scholarship Council Fellowship in 2014, and won several awards for department construction and teaching in Beihang University. In terms of industrial experience, he previously worked as an optical wireless communication engineer at SIGPRO, Ottawa, Canada; an optical fiber system engineer at Ciena Corporation, Ottawa, Canada; and a technique consultant at Cambridge Touch Technologies Inc., Cambridge, UK.

Shuo Yan received her PhD in software engineering from Beijing Institute of Technology in 2017. She has an interdisciplinary background and practical experience in the field of intelligent interactive performance. She is currently a lecturer in the School of New Media Art and Design, Beihang University. She previously worked as a research assistant with the Fluid Interfaces group at MIT Media Lab and as a UX researcher/designer at Intel Labs China, developing innovative mobile applications. Her grants, awards, publications, and art works include over 10 scientific papers (CHI, SIGGRAPH Asia, ISMAR, IUI, etc.), two research projects supported by National Science Foundation of China and China National Arts Fund, two patents, a national excellent doctoral dissertation award supported by China Simulation Federation. Her work seeks to push the boundaries of design and technology to create innovative solutions with the power to augment human capabilities.

Hang Zhao obtained his PhD and MS from the Massachusetts Institute of Technology, with a focus on computer vision and multimodal machine learning. He is now an Assistant Professor at IIIS (Institute for Interdisciplinary Information Sciences), Tsinghua University. Prior to that, he worked as a research scientist at Waymo, formerly known as Google's self-driving project. Dr. Hang Zhao's works have been widely covered by mainstream tech media such as BBC, NBC, MIT Technology Review, etc. His work won 2015 ICCP Best Paper runner-up. He is a Snap Research Fellow, and also a recipient of 2020 Forbes China 30 Under 30.

Arokia Nathan is a leading pioneer in the development and application of thin film transistor technologies to flexible electronics, display and sensor systems. Following his PhD in Electrical Engineering, University of Alberta, Canada in 1988, he joined LSI Logic USA and subsequently the Institute of Quantum Electronics, ETH Zürich, Switzerland, before joining the Electrical and Computer Engineering Department, University of Waterloo, Canada. In 2006, he joined the London Centre for Nanotechnology, University College London as the Sumitomo Chair of Nanotechnology. He moved to Cambridge University in 2011 as the Chair of Photonic Systems and Displays, and he is currently a Bye-Fellow and Tutor at Darwin College. He has over 600 publications including 4 books, and more that 110 patents and four spin-off companies. He is a Fellow of IEEE, a Distinguished Lecturer of the IEEE Electron Devices Society and Sensor Council, a Chartered Engineer (UK), Fellow of the Institution of Engineering and Technology (UK), and winner of the 2020 IEEE EDS JJ Ebers Award.