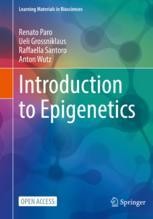 This open access textbook leads the reader from basic concepts of chromatin structure and function and RNA mechanisms to the understanding of epigenetics, imprinting, regeneration and reprogramming. The textbook treats epigenetic phenomena in animals, as well as plants. Written by four internationally known experts and senior lecturers in this field, it provides a valuable tool for Master- and PhD- students who need to comprehend the principles of epigenetics, or wish to gain a deeper knowledge in this field.

After reading this book, the student will:

Ueli Grossniklaus is Professor of Plant Developmental Genetics and Director of the Department of Plant and Microbial Biology of the University of Zurich. Grossniklaus earned his PhD working on Drosophila development under the mentorship of Walter J. Gehring at the University of Basel. Extending concepts and experimental approaches from Drosophila to plants, he has led thriving research groups investigating the molecular basis of plant reproduction, first at Cold Spring Harbor Laboratory in the U.S.A. and, since 2000, at the University of Zurich in Switzerland. Grossniklaus’ group made seminal contribution to understanding the epigenetic mechanisms that control of seed development, in particular gene regulation by Polycomb-group proteins and genomic imprinting.

Raffaella Santoro is Professor of Epigenetics and Chromatin Dynamics at the University of Zurich. She studied Chemistry at the University of Rome La Sapienza where she also obtained her PhD in Biochemistry. After a post-doctoral stay at the German Cancer Research Center in Heidelberg, in 2007 she became group leader at ETH and thereafter at the University of Zurich. Since 2015, she is a member of the European Molecular Biology Laboratory (EMBL). In 2018 was awarded of an European Research Council Advanced Grant. Her main area of research lies in the analysis of epigenetic and chromatin regulation and the dynamics of genome organization and how their alterations contribute to complex diseases such as cancer.

Anton Wutz is Professor of Genetics at the Institute of Molecular Health Sciences at the ETH Zurich. He studies nuclear mechanisms that regulate changes of cellular identity during stem cell differentiation. His laboratory has contributed to the development of new genetic strategies for studying mammalian pathways of gene regulation and concepts of how these act to specify the diverse cell types of the body.