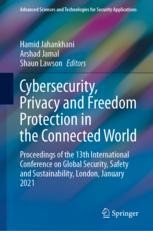 Cybersecurity, Privacy and Freedom Protection in the Connected World

This book provides an opportunity for investigators, government officials, systems scientists, strategists, assurance researchers, owners, operators and maintainers of large, complex and advanced systems and infrastructures to update their knowledge with the state of best practice in the challenging domains whilst networking with the leading representatives, researchers and solution providers.

Drawing on 12 years of successful events on information security, digital forensics and cyber-crime, the 13th ICGS3-20 conference aims to provide attendees with an information-packed agenda with representatives from across the industry and the globe. The challenges of complexity, rapid pace of change and risk/opportunity issues associated with modern products, systems, special events and infrastructures.  In an era of unprecedented volatile, political and economic environment across the world, computer-based systems face ever more increasing challenges, disputes and responsibilities, and whilst the Internet has created a global platform for the exchange of ideas, goods and services, it has also created boundless opportunities for cyber-crime.

As an increasing number of large organizations and individuals use the Internet and its satellite mobile technologies, they are increasingly vulnerable to cyber-crime threats. It is therefore paramount that the security industry raises its game to combat these threats. Whilst there is a huge adoption of technology and smart home devices, comparably, there is a rise of threat vector in the abuse of the technology in domestic violence inflicted through IoT too. All these are an issue of global importance as law enforcement agencies all over the world are struggling to cope.

Hamid Jahankhani’s principal research area for a number of years has been in the field of cybersecurity, information security and digital forensics. In partnership with the key industrial sectors, he has examined and established several innovative research projects that are of direct relevance to the needs of UK and European information security, digital forensics industries, Critical National Infrastructure and law enforcement agencies. Hamid has planned, proposed and managed several collaborative projects, and secured a substantial research income of up to £6m.

Professor Jahankhani is Editor-in-Chief of the International Journal of Electronic Security and Digital Forensics, International Journal of Electronic democracy, both published by Inderscience, and General Chair of the annual International Conference on Global Security, Safety and Sustainability (ICGS3). Hamid has edited and contributed to over 20 books and has over 150 conference and journal publications together with various BBC radio interviews. Hamid has supervised to completion of 13 Ph.D. and professional doctorate degree students and overseen 67 Ph.D. students progressing. In summer 2017, Hamid was trained as the GCHQ “cyberist” to train the next generation of cybersecurity experts through GCHQ CyberFirst initiative. Recently, Hamid trained over 100 frontline police officers in three of the largest London Boroughs.

Shaun Lawson is Professor of Social Computing and Head of the Department of Computer & Information Sciences at Northumbria University. He leads the Northumbria Social Computing (NorSC) research group. Prior to joining Northumbria in November 2015, he founded and led, for 10 years, the Lincoln Social Computing (LiSC) Research Centre at the University of Lincoln. His research lies at the boundaries between computing, design and the social sciences, and explores the use and significance of social media, and other collaborative and participatory digital services, in people’s lives. This includes a focus on the design, implementation and evaluation of new social platforms, applications and services as well as analysis of text, speech and image data. He was appointed the UK’s first Professor in Social Computing in 2011. He has conducted applied and cross-disciplinary work in areas including mental health and wellbeing, politics, activism, animal behaviour and sustainability. He has held, as PI, grants totalling over £2.5 million from funders such as EPSRC, ESRC, the EU, Microsoft Research, as well as industry, and is the co-author of over 150 peer-reviewed publications, including 12 full CHI papers in the last three years. He is Founding Chair of the UK’s SIGCHI chapter, a full member of both EPSRC and ESRC Peer Review Colleges and Visiting Professor in Computer Science at UCL.