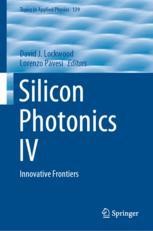 This fourth book in the series Silicon Photonics gathers together reviews of recent advances in the field of silicon photonics that go beyond already established and applied concepts in this technology. The field of research and development in silicon photonics has moved beyond improvements of integrated circuits fabricated with complementary metal–oxide–semiconductor (CMOS) technology to applications in engineering, physics, chemistry, materials science, biology, and medicine. The chapters provided in this book by experts in their fields thus cover not only new research into the highly desired goal of light production in Group IV materials, but also new measurement regimes and novel technologies, particularly in information processing and telecommunication. The book is suited for graduate students, established scientists, and research engineers who want to update their knowledge in these new topics.

David J. Lockwood obtained his Ph.D. in physics from Canterbury University (Cantuar), New Zealand in 1969, and he was awarded a D.Sc. in 1978 from Edinburgh University, U.K. and a D.Sc. from Canterbury University in 2000 for his work on the electronic, optical, and magnetic properties of solids. He carried out post-doctoral work in physical chemistry at Waterloo University, Canada (1970–1971), and was a Research Fellow in Edinburgh University (1972–1978) before joining the National Research Council (NRC) of Canada in 1978 where he is presently a Researcher Emeritus. At NRC, Lockwood’s research has centered on the optical properties of low dimensional materials and recently has focused on Group IV and III-V semiconductor quantum dots and transition-metal magnetic nanostructures. Lockwood has published more than 650 scientific articles in journals and books and has 6 U.S. patents. He is a Fellow of the Royal Society of Canada, the American Physical Society, the Institute of Physics, and the Electrochemical Society and served on the editorial boards of 6 physics journals as well as being the founding editor of the Springer-Nature book series “Nanostructure Science and Technology”. In 2005 he was awarded the Brockhouse Medal of the Canadian Association of Physicists for outstanding achievement in condensed matter and materials physics and the Tory Medal of the Royal Society of Canada for outstanding research in any branch of astronomy, chemistry, mathematics, physics, or an allied science. In 2008 he received the Exact and Natural Sciences Award of the Academy of Sciences of Cuba, in 2010 the Centennial Outstanding Achievement Award of the Electrochemical Society, and in 2011 the Lifetime Achievement Award of the Canadian Semiconductor Science and Technology Conference. In October 2012, a Symposium in his honour was held at the Electrochemical Society Fall Meeting in Honolulu. In 2013 he was awarded the Gold Medal for Lifetime Achievement in Physics from the Canadian Association of Physicists for his distinguished and sustained contributions to the elucidation of the optical properties of solids, low-dimensional semiconductor systems, and in particular light-emission from silicon, as well as his contributions to the advancement of physics in Canada and worldwide. He is the 2019 recipient of the prestigious Gordon E. Moore Medal for Outstanding Achievement in Solid State Science and Technology, which was established by the Electrochemical Society in 1971. The award recognizes his outstanding original contributions to the elucidation of the role of quantum-confinement effects in the optical and electrochemical properties of semiconductor nanostructures with applications in optoelectronics and photonics.
Lorenzo Pavesi is Professor of Experimental Physics at the University of Trento, Italy. He received his PhD in Physics in 1990 at the Ecole Polytechnique Federale of Lausanne (Switzerland). In 1990 he became Assistant Professor, Associate Professor in 1999 and Full Professor in 2002 at the University of Trento. He currently leads the Nanoscience Laboratory. He was the first president and founder of the IEEE italian chapter on Nanotechnology. He has directed 39 PhD students and more than 30 Master thesis students. His research activity concerned the optical properties of semiconductors. During the last years, he concentrated on Silicon based photonics where he looks for the convergence between photonics and electronics. He is interested in active photonics devices which can be integrated in silicon by using optical nolinearities and modified material properties. His interests encompass also optical sensors or biosensors. Recent development is toward integrated quantum photonics and neuromorphic photonics. In silicon photonics, he is one of the worldwide recognized experts, he organized several international conferences, workshops and schools and is a frequently invited speaker. He manages several research projects, both national and international. He is an ERC grantee. He is a frequently invited reviewer, monitor or referee for photonics projects by several grant agencies. He is an author or co-author of more than 500 papers, author of several reviews, editor of more than 15 books, author of 2 books and holds 9 patents. He is chief speciality editor of the section Optics and Photonics of Frontiers in Physics  and founding editor of the series Photonic Materials and Applications, a joint initiative of SPIE and Elsevier. Moreover he sits in the editorial board of the ETRI Journal and of the journals Sensors and  Applied Sciences: Optics and Lasers. He is in the advisory board of Glass-to-Power and of Sybilla, two italian start-ups. In 2001 he was awarded the title of Cavaliere by the Italian President for scientific merit. In 2010 and 2011 he was elected distinguished speaker of the IEEE- Photonics society. He is fellow of the IEEE, of SPIE and of the SIF. He holds an H-number of 59 according to Scopus and Web of Science, and of 73 according to Google Scholar.