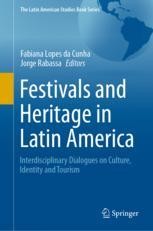 Festivals and Heritage in Latin America

This book explores a variety of heritage dialogues, from global and specific approaches, combining different views, perceptions and senses. Following the first volume on Latin American Heritage as published in this book series in 2019, this new volume focuses on music, dance and railway heritage, considering artistic, archaeological, natural, ethnological and industrial aspects. It is divided into four thematic sections – 1) parties and cultural heritage, 2) railway heritage and museums, 3) archaeological heritage and tourism, and 4) cultural landscape and tourism – and presents chapters on a diverse range of topics, from samba and cultural identities in Rio de Janeiro and London to the "musealization" of railway assets, the history of Antarctic archaeology, the value of scenic landscapes and urban memory in Spain, and the cultural landscape of Brazil.

Dra. Fabiana Lopes da Cunha - Post-doctorate and Visiting Research Felow (2017), in the Department of Spanish, Portuguese & Latin American Studies, Faculty of Arts & Humanities at King's College London under supervision of Camoes Professor David Treece. PhD and Master in Social History from the University of São Paulo (USP) where she also completed her bachelor's and undergraduate degrees in History. She has been teaching and researching at Paulista State University "Júlio de Mesquita Filho" since 2003, where she also coordinates a Center for Documentation and Memory (CEDOM) with the objective of preserving local and regional memory. She has experience in the area of History with emphasis on Brazilian History , mainly in the area of Cultural History during the imperial and republican period until the end of the Estado Novo. His themes of interest are linked to the Social History of Culture and Atlantic History, such as: Brazilian popular music, popular culture (parties), museums, diaspora and intangible heritage. In 2004 he published his first book "Da Marginalidade ao Estrelato: O Samba na Construção da Nacionalidade (1917-1945)", by Editora Annablume. He published several articles in scientific journals, chapters and books on the theme of his research.   She is part of the post-graduation program of the History course of the Paulista State University "Júlio de Mesquita Filho" -UNESP in the research line "Culture, Historiography and Heritage". She was a counselor at CONDEPHAAT between 2011 and 2014. She is leader of the Heritage research group, vice-leader of the History & Music research group and participates in the Identity Dialogues research group at King's College London. She was invited, as articulator of the Angra Doce Project in the State of São Paulo and representative of Paulista State University -UNESP, to participate in the Global Leaders Summit 2018 and the Brazil SDG Business Forum, during the 73rd United Nations General Assembly.Dr. Jorge Rabassa obtained his Licenciado and Doctor degrees in Geology at the School of Natural Sciences, Universidad Nacional de La Plata, La Plata, Argentina. He is a researcher with CONICET, the National Research Council of Argentina, at CADIC, Centro Austral de Investigaciones Científicas, Ushuaia, Tierra del Fuego, since 1986. He is presently the director of CADIC, the southernmost, multidisciplinary research center of the World with permanent scientific staff. He is also adjunct Full Professor of Geology at the Universidad Nacional de Tierra del Fuego. He has been a lecturer in several Argentine universities and also the President of Comahue University, one of the Argentine Patagonian universities. He is a member of the Argentine Academy of Sciences and a corresponding member of the Catalonian Academy of Sciences. He has been a Visiting Professor in several universities of the United States and Canada, as well as in various Western Europe countries, the Republic of South Africa and China. His main research interests are geomorphology, ancient landscapes, long-term landscape evolution, and glacial and Quaternary studies. He has published over 150 scientific papers and book chapters, and edited 17 books and scientific journal special volumes. He has directed 15 doctoral dissertations and many graduation theses and is a member of the editorial board of several international journals. Until 2018 he was President of the Asociación Argentina de Geomorfología y Cuaternario. He is presently one of the Series Editors of the Springer Briefs in Earth System Sciences series and The Latin American Studies Book Series.