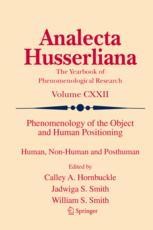 Phenomenology of the Object and Human Positioning

This edited volume explores the intersections of the human, nonhuman, transhuman, and posthuman from a phenomenological perspective.  Representing perspectives from several disciplines, these investigations take a closer look at the relationship between the phenomenology of life, creative ontopoiesis, and otherness; technology and the human; art and the question of humanity; nonhumans, animals, and intentionality; and transhumanism.  Ontological positioning of the human is reconsidered with regard to the nonhuman, transhuman, and posthuman within the cosmos.  Further examination of the artificial and object in the lifeworld is also explored.  This volume also pays tribute to Anna-Teresa Tymieniecka and her methodical contributions to phenomenology.  This text appeals to students and researchers of phenomenology worldwide.

Dr. Calley A. Hornbuckle is an Associate Professor of English in the School of Liberal Arts at Dalton State College, Georgia.  Her scholarship focuses on British women writers and the environmental tradition.

She has published on Anna Letitia Barbauld and ecological sensibility and presented several papers on ecological intelligence in the works of Charlotte Smith, Ann Radcliffe, Dorothy Wordsworth, and Beatrix Potter. Currently, she is investigating Mary Robinson’s investigations of ethics, ethology, and aesthetics in light of recent developments in neuroscience and embedded cognition.  She also serves as an executive editor for The Explicator.

Dr. Hornbuckle has presented at the World Phenomenology Institute on numerous occasions

Dr. Jadwiga S. Smith is emerita Professor of English at Bridgewater State University where she has worked for thirty-two years.  She earned two master’s degrees in European and Slavic literatures from Jagiellonian University in Krakow, Poland, where she developed an early interest in phenomenology.  Graduate studies took Dr. Smith to Duquesne University, where she earned a Ph.D. in English literature; she wrote her dissertation on the phenomenology of Roman Ingarden and its application to the stage play.  She has continued to publish countless scholarly articles on phenomenology, literary theory, and drama in the Analecta Husserliana, the Phenomenological Inquiry, and other journals.

In the early 1980s, Dr. Smith began working with Dr. Anna-Teresa Tymieniecka and became a major collaborator in the World Phenomenology Institute.  After Dr. Tymieniecka’s death, Dr. Smith became the WPI President for the American Division.  She continues this important work today, organizing and administering conferences, conducting and leading conferences, and editing volumes of the Analecta Husserliana: The Yearbook of Phenomenological Research.  Dr. Smith remains a vital, enthusiastic, inspiring link in the World Phenomenology Institute where she encourages younger scholars to pursue phenomenological studies.

Dr.  William S. Smith is emeritus Professor of English and Dean of the College of Graduate Studies at Bridgewater State University in Bridgewater, Massachusetts, where he worked for thirty plus years.  Graduating from Duquesne University with a Ph.D. in English literature, he has spent forty years in higher education.  Dr. Smith’s scholarly interests and areas of specialization include nineteenth-century British literature, particularly the poetry of William Wordsworth and the Gerard Manley Hopkins.  Of particular interest are the epistemological traditions extending across the poetic landscape of the nineteenth century.  His scholarly articles have appeared in the Phenomenological Inquiry and the Analecta Husserliana.

Dr. Smith’s relationship with the World Phenomenology Institute began in the mid-1980s and continues today as the Executive President of the WPI.  These administrative responsibilities are many, including managing the WPI staff, organizing conferences, administering funding sources, and editing the Analecta Husserliana: The Yearbook of Phenomenological Research