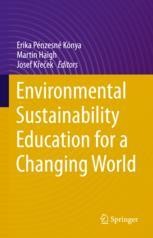 Globally, there is a need to promote and empower practical action towards better environmental conservation and greater sustainability; education aspires to achieve and motivate this – one mind at a time. This book advances a future-oriented vision of the development of environmental sustainability education in settings outside the high-school. It provides practical guidance for teacher practitioners and policy makers in community-oriented environmental sustainability education.  It promotes a modern holistic approach to sustainability learning in and by the community through participative engagement with sustainability issues.  Its special foci include working with volunteers and citizen scientists, through museums or through re-purposing Higher Education. Its approach emphasises the implementation of the United Nation’s Sustainable Development Goals and cooperation with environmental management professionals. This book’s cosponsors include the International Association for Headwater Control and FAO – European Forestry Commission’s Working Party on the Management of Mountain Watersheds, as well as the International Environmental Education Conferences, Eger, Hungary and the Hungarian Academy of Science’s Subcommittee on Future Studies. Community education has long been a goal for environmental management, whose practitioners realise that interventions, such as biodiversity conservation, are only truly sustainable when supported by the local land-user and stakeholder communities; this depends upon these stakeholders’ understanding why intervention is necessary.

Erika Pénzesné Kónya. PhD, Associate Professor of Biology, Head of Department of Botany and Plant Physiology, Eszterházy Károly University, Hungary and Editor of the Journal, Acta Biologica Plantarum Agriensis (ABPA). In 2017 she was selected as Vice chair of the Planta Europa Network. In 2003 and 2007 she was awarded the Zólyominé Barna Piroska prize of the Ecological Committe of Hungarian Academy of Sciences and in 2007 the Science Award of Miskolc Committe of Hungarian Academy of Sciences. From 2015 she is the leader of the Botanical Garden of Eszterházy Károly University and she developed a school garden programme and she organised the international Botanical Art Festival and week of Botany for 10 years there. Her special interests include environmental education for a sustainable future, plant conservation and plant ecology. She is a founder member of International Environmental Conference 2016 and 2018 (IEEC). She is the co-leader of the project supported by EU “Building international research environment of light pollution (EFOP 362.16-2017-000014)” in which there is a working group dealing with environmental education.

Martin Haigh, PhD, NTF, SFHEA, is Emeritus Professor of Geography, Department of Social Sciences, Oxford Brookes University, UK and a former editor of the Journal of Geography in Higher Education. In 2010, he was awarded the Royal Geographical Society’s Taylor and Francis Award for ‘Excellence in Geography Teaching (Higher Education)’. His special interests include environmental education for a sustainable future, the development of dharmic pedagogies, the internationalisation of university curricula, and applied environmental reconstruction, especially in Uttarakhand and Wales, where he leads a long running volunteer- and community-based project on the reforestation and rehabilitation of former coal-lands. He is a founder member of the International Association for Headwater Control and former leader of the World Association of Soil and Water Conservation (WASWAC). He was formerly ‘Technical Advisor’ to the Bhumi Project, based at the Oxford University Centre for Hindu Studies and, previously, to the Lotus Trust’s ‘Karma to Climate Change’ project. This initiative, led by young people from the UK’s immigrant community, attempted to promote prosustainablility behaviours to householders. The project was recognised as an ‘outstanding’ and ‘unique’ example of good practice by a UNESCO team in July 2011.

Josef Křeček, PhD, is Associate Professor of Hydrology and Climatology, Department of Hydraulics and Hydrology, Czech Technical University in Prague (Czech Republic). His special interests include ecohydrology, sustainable water resources, and environmental services of mountain catchments. He is experienced with several international projects abroad (Conservation of the Maharlu Lake in Irán or Water Circulation in the Yellow River Basin) and using volunteers in his field research (Earthwatch project “Mountain Waters of Bohemia”). He is a founder member of the International Association for Headwater Control and former chair of the EFC/FAO Working Party on the Management of Mountain Watersheds. For these activities, he got the award “European Hero” of the Time Magazine in 2003.