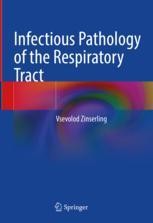 Infectious Pathology of the Respiratory Tract

This book discusses all aspects of pulmonary pathology, including different bacterial, viral, fungal, mycoplasma and protozoan pathogens, accompanied by illustrations that show macro- and histopathological changes. It also presents microbiological, epidemiological and clinical data, with a particular focus on pneumonias of different bacterial aetiologies, influenza, and other viral infections. Further, the book explores the importance of mixed infections, including those in the late stages of HIV infections and virus-bacterial pneumonias, as well as pathological changes in modern tuberculosis, lung granuloma, and respiratory tract inflammation in different age groups.

Vsevolod A. Zinserling (Tsinzerling) was born 1954 in Leningrad (Russia) in the family of Prof. Dr. Alexander Zinserling (1923-1995) - outstanding pathologist.  He graduated from Leningrad Paediatric Medical Institute in 1977, worked as research scientist, practicing as pathologist in Leningrad Research Institute of Children’s Infections (1977-1988). In 1978-80 had postgraduate training at the chair of pathology (chief. Prof. O.K. Khmelnitsky) of Leningrad Institute for Postgraduate Medical Training. 1981 defended his cand. med. sc. ( Dr. med.) thesis “Brain changes in mycoplasmosis”. In 1988-92 chief of the Central Research Laboratory of Leningrad Paediatric Medical Institute. In 1988 defended the doct. med. sci. thesis “Brain lesions due to respiratory viruses”.  Since 1992-2007 chief of the Institute of Pathology St. Petersburg Paediatric Medical Academy. Since 2017 chV. Zinserling is organizing and providing the postgraduate medical training in pediatric pathology in Russia. He is also providing consultations in the city’s Consulting Centre for the Infectious Pathology and. Since 2017 professor of pathology at the V.A. National Research Center. Author of more than 300 scientific publications devoted to different topics of infectious, perinatal and brain pathology, including manuals (in Russian) “Modern Infections” (2002), “Perinatal infections (2002)”, “Infections of the Nervous System” (2005). Participant of many international congresses, being invited lecturer at European Congresses of ESP (2010-2019).
With contributions by
Yulia R. Zyuzya,  was born in 1968, graduated from the Perm state medical Institute with a degree in medicine (1991). Pathologist of the highest category, work experience in the specialty of 26 years. Cand.  Med. Sci. (specialty "Pathological anatomy", "Infectious diseases"), PhD thesis defense in 2000. Worked as assistant in the Pathology Department of the Perm state medical Academy; as a pathologist in Regional clinical hospital, Perm; senior research fellow at the Department of pathomorphology, biochemistry and electron microscopy at Central research Institute of tuberculosis Russian Academy of medical Sciences, pathologist at Infectious clinical hospital № 2 in Moscow; as a pathologist, then as head of a centralized pathology Department of the Moscow scientific-practical center for tuberculosis; the medical Scientific research center of tuberculosis and infectious diseases of Ministry of health of the Russian Federation. Research interests: pathological anatomy of tuberculosis, HIV-associated infections, complications of tuberculosis therapy, morphological diagnostics of granulomatous processes. Author of more than 30 publications in medical scientific journals, co-author of 5 monographs. Participant of national and international scientific conferences on pathological anatomy, phthisiology, pulmonology, infectious diseases, etc.
Vladimir V. Svistunov was born in 1957. After graduation from Irkutsk Medical Institute in 1981 is working in pathology. Since 1985 chief of pathology  department at largest in Irkutsk Cities Hospital and since 2013 chief of pathology chair at Irkutsk Medical University. In 2010 got PhD (cand. Med. Scie.) degree in pathology under the guidance of V.A. Zinserling for the dissertation devoted to lobar pneumonias. Is author of numerous papers devoted to pneumonias, tuberculosis and different issues.
Valery V. Varyasin was born in 1947. After graduation from Leningrad Pediatric Medical Institute in 1971 is working in pediatric pathology. In 1984 defended his PhD (cand. Med. Scie) degree in pathology under guidance of A.V. Zinserling for the dissertation devoted to heart lesions due to respiratory viruses. Since 1987 is living and working as general pathologist in Moscow. Since 1996 is chief of pathology department at hospital N52 – one of the largest in the city. Is considered to be one of the most experienced pathologists in the country. Is author of numerous papers devoted to different issues of pathology, including infectious.