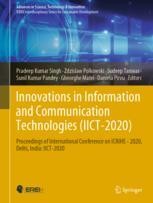 Dr. Pradeep Kumar Singh is currently working as a Professor in Department of Computer Science & Engineering at ABES Engineering College, Ghaziabad, India. He has completed his Ph.D. in Computer Science & Engineering from Gautam Buddha University (State Government University), Greater Noida, UP, India. He received his M.Tech. (CSE) with Distinction from Guru Gobind Singh Indraprastha University, New Delhi, India. Dr. Singh is having life membership of Computer Society of India (CSI), Life Member of IEI and promoted to Senior Member Grade from CSI. He is Senior member of ACM, IACSIT-Singapore and IAENG-Hong Kong. He is an Associate Editor of the International Journal of Information Security and Cybercrime (IJISC) a scientific peer reviewed journal from Romania and IJAEC, IGI Global, USA. He has published nearly 95 research papers in various International Journals and Conferences of repute. He has received three sponsored research projects grant of Rs 25 Lacs from Govt. of India and Govt. of Himachal Pradesh. He has edited 8 books from Springer and One from Elsevier. He has total Google scholars of 771, H-index 16 and i-10 Index 30 in his account.

Dr. Zdzislaw Polkowski, Adjunct Professor & Rector’s Representative for International Cooperation and Erasmus + Programme in Jan Wyzykowski University in Polkowice, Poland.Dr. Z. Polkowski at present is the Rector’s Representative for International Cooperation and Erasmus + Programme in Jan Wyzykowski University in Polkowice, Poland. He teaches subjects such as: IT system in business, IT, Logistics, Information Technology, IT Systems in Business, Creating Websites and Portals, Logistics, Engineering Designing with the Use of AUTOCAD, IT in administration. Since 2009 he has been Dean of the Technical faculty in UZZM in Lubin. He graduated from the Wroclaw University of Technology with the PhD degree. His PhD thesis was ”Computer assisted evaluation of employees with the use of MCDM methods”. Additionally, he graduated from the University of Zielona Gora, the Economic University of Wroclaw. The main areas of scientific interest are: e-commerce, e-business, IT systems in business, logistics - especially in small and medium businesses. He has visited many small companies in Europe (Germany, the Netherlands, Spain, France, UK, Austria, Romania, Bulgaria, Slovakia, Hungary, Sweden) as well as in the UEA, China, Singapore, India, South Korea, Hong Kong, Japan, Taiwan which deal with e-commerce, e-business, IT remarketing. He is interested in B2B portals for improving trade and business contact. He is the author of many scientific papers and posters about IT systems, virtualization, e-business, which were published at domestic and international conferences and journals. He has also visited several international universities. In addition, he works with students in an academic club VAO and Erasmus program – the details may be found on www.erasmus.polkowski.com.pl. For many years he has been taking part in the very famous events like CEBIT in Germany, HKTC in Hong Kong, EXPO in South Korea, EXHANGE in Budapest, Infosystem in Poznan, where he gained his current knowledge concerning computerization. Moreover, he is the owner of a small company, where he tries and tests new ideas in practice. In Polkowice he has done many IT project especially in schools, small companies and government institutions. Contacts with others small companies allow him to define the up-to-date state of using IT tools in business. Website: www.studenci.polkowski.com.pl


Dr. Sudeep Tanwar is an Associate Professor in the Computer Science and Engineering Department at Institute of Technology, Nirma University, Ahmedabad, Gujarat, India. He is visiting Professor in Jan Wyzykowski University in Polkowice, Poland and University of Pitesti in Pitesti, Romania. He received B.Tech in 2002 from Kurukshetra University, India, M.Tech (Honor’s) in 2009 from Guru Gobind Singh Indraprastha University, Delhi, India and Ph.D. in 2016 with specialization in Wireless Sensor Network. He has authored or coauthored more than 130 technical research papers published in leading journals and conferences from the IEEE, Elsevier, Springer, Wiley, etc.

Dr. Sunil Kumar Pandey is Professor & Director, Institute of Technology & Science, Mohan Nagar, Ghaziabad, India. He is one of the trained on OBE (Outcome-based Evaluation) by NBA for Washington Accord. He is senior member CSI, IEEE, and ACM. He has published nearly 65 research papers. He has 22 years of teaching and research experience.  He received many  prestigious awards of IT Industry including:  CIO Crown Award – 2018, Change Agent200 Award by Enterprise IT Magazine, Cyber Sentinnel Award -2018, Next CSO – 2018 and many more honours to his credit.

DR. GHEORGHE MATEI, Professor, University of Craiova, ROMANIA
He is a graduate of the University of Craiova, the Faculty of Economic Sciences, the 1980 class. He pursued the doctoral studies in the Economics field under the guidance of Prof. Ion Trăistaru at the University of Craiova, where he gained his PhD in 1994, with the doctoral thesis entitled The nature and efficieny of expenditure on education. From 1984, he has been teaching at the University of Craiova, where he became professor in 1999 and a doctoral thesis advisor in 2008. He has had 22 PhD candidates, of which there have been 15 completed, while 3 are in progress. The activity of Professor Gheorghe Matei is closely related to the issues of public finance, fiscal policy, social and commercial insurance under the circumstances of Romania’s integration in the European Union and globalization. The most significant scientific contributions of Professor Gheorghe Matei regard aspects of social assistance in Romania compared to the Eastern European countries and developed member states, the impact of public debt in the European Union member countries, local finances in the context of decentralization and local autonomy, social health insurance, Romania’s fiscal policy in the context of globalization and so on. Over the years, Professor Gheorghe Matei published more than 50 indexed scientific articles and 5 relevant books, which brought him a large number of citations and a Hirsch index of 4. He was a visiting professor at the Catholic University of Nijmegen, Holland (July 2000), Robert Schuman University, Strasbourg, France (April 2002) and Radboud University Nijmegen, Holland (April 2002). He presented over 20 scientific papers at International Conferences. He is member of the editorial board and scientific committees, an organizer of scientific events and reviewer for 7 indexed journals and national and international scientific events. He has participated in numerous national and international research projects as project director and member of the implementation teams.
DR. DANIELA PÎRVU, Associate Professor, University of Pitesti, Faculty of Economic Sciences, ROMANIA. She graduated the Faculty of Economic Sciences of the University of Craiova in 1999, she obtained a doctorate in Economics in 2006 with PhD thesis entitled Economic Issues in the Work of Vintilă I. C. Brătianu and she obtained a doctorate in Finance in 2011 with PhD thesis entitled Trends of harmonizing corporate income taxes in the EU. Since 2000 she has been a teaching assistant at the University of Pitesti and since 2016 she supervises doctoral students in the Doctoral School of Economics at the University of Craiova.
The main research directions focused on the EU taxation policy, the implications of public procurement to ensure the efficient spending in public sector the promoting economiccompetitiveness and the innovative solutions to improve budgetary governance. Over the years, she has published 8 articles in ISI-indexed journals, over 30 articles in internationally-indexedjournals, a book edited by Palgrave McMillan, 3 chapters in books edited by Springer, and 8 specializes books edited by publishing houses in Romania. She was a member of 2 researchproject teams financed by the National Authority for Scientific Research, a member of 3 project teams financed by European Social Fund, a member of 1 project team financed by INTERREGand a member of 1 project team financed by the Ministry of National Education. She is a member of the editorial staff of the Scientific Bulletin – Economic Sciences and the InternationalJournal of Applied Statistics and Econometrics and a member of the review committees of several journals. She was also a member of the organizing committees of several internationalscientific conferences and scientific research workshops. In 2014, she received a research grant in a postdoctoral research scholarship program organized under the project entitled “Excellencein Scientific, Interdisciplinary, Doctoral and Postdoctoral Research in the Economic, Social and Medical Fields”, coordinator - the Academy of Economic Studies. On this occasion, sheparticipates in a research internship at the Public Finance Institute in Zagreb, Croatia.