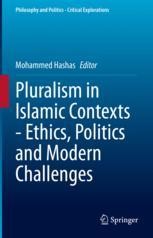 This book brings together international scholars of Islamic philosophy, theology and politics to examine these current major questions: What is the place of pluralism in the Islamic founding texts? How have sacred and prophetic texts been interpreted throughout major Islamic intellectual history by the Sunnis and Shi‘a? How does contemporary Islamic thought treat religious and political diversity in modern nation states and in societies in transition? How is pluralism dealt with in modern major and minor Islamic contexts? How does modern political Islam deal with pluralism in the public sphere? And what are the major internal and external challenges to pluralism in Islamic contexts?

These questions that have become of paramount relevance in religious studies especially during the last three-four decades are answered as critically highlighted in Islamic founding sources, the formative classical sources and how it has been lived and practiced in past and present Islamic majority societies and communities around the world. Case studies cover Egypt, Turkey, Indonesia, and Thailand, besides various internal references to other contexts.

Mohammed Hashas is Senior Research Fellow at FSCIRE Foundation for Religious Studies “Giovanni XXIII”, in Palermo, Italy. He is also a Faculty Member at the Department of Political Science of Luiss University of Rome, from which he holds a PhD in Political Theory (2013). His research areas are Modern and Contemporary Arab-Islamic Thought, European Islamic Thought, Islamic Ethics, and Modern Moroccan Thought. Hashas was a Research Fellow at Babylon Center for the Study of the Multicultural Society in Tilburg, the Netherlands (July-October 2010), at the Center for European Islamic Thought at the University of Copenhagen (Sept. 2011 – July 2012), a Visiting Research Fellow at Oxford Center for Islamic Studies (January-March 2017), a Guest Scholar at Leibniz-ZMO Zentrum Moderner Orient in Berlin (April - May 2017), where he was again a Visiting Research Fellow (November 2020 – March 2021).

Hashas has authored The Idea of European Islam: Religion, Ethics, Politics and Perpetual Modernity (Routledge, 2019), Intercultural Geopoetics: An Introduction to Kenneth White’s Open World (Cambridge S. Publishing, 2017), and led the co-editions of Islam, State and Modernity: Mohamed Abed al-Jabri and the Future of the Arab World (Palgrave, 2018), Imams in Western Europe: Authority, Training and Institutional Challenges (Amsterdam UP, 2018), and Islamic Ethics and the Trusteeship Paradigm: Taha Abderrahmane’s Philosophy in Comparative Perspectives (Brill, 2020). His papers have appeared with the Journal of Muslims of Europe, Journal of Muslim Minority Affairs, the Journal of Studia Islamica, The American Journal of Islamic Social Sciences, and Oriente Moderno in English. Working papers and long essays have appeared with the International Affairs Institute IAI-Rome, Critical Muslim in London, and Resetdoc in Milan. Papers in Arabic have appeared with Nama Center for Studies and Research, Almesbar Center for Studies and Research, and Mominoun Without Borders, besides various newspaper articles in both Arabic and English. Hashas is currently working on a collective comprehensive volume on Contemporary Moroccan Thought (for 2022).