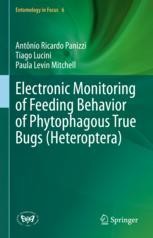 This book compiles for the first time all the current information on the electronic monitoring of the feeding behavior of phytophagous true bugs. It includes state-of-the-art illustrations of feeding sites on the various plant structures, and examines how the different feeding strategies are related to the variable waveforms generated using the electropenetrography (EPG) technique. Further, the book describes the mouthparts and modes of feeding and discusses the physical and chemical damage resulting from feeding activities. Covering in detail all EPG studies developed and conducted using true bugs published to date, it explores the use of electronic monitoring of feeding coupled with histological analyses to improve strategies to control true bugs, from traditional chemical methods to gene silencing (RNAi).

Antônio Ricardo Panizzi received his PhD from the University of Florida, USA and is currently a research entomologist at Embrapa in Brazil. He is an Invited Professor at the Federal University of Paraná, Brazil and at the Universidad de la Republica in Uruguay. He was awarded the ESA International Branch Distinguished Scientist Award, 2017 and served as Editor of the Annals of the Entomological Society of Brazil and Neotropical Entomology, published by Springer. He has also edited/co-edited six books. He served as head of the Entomology Team at Embrapa Soybean Research Center, a consultant for Soybean Entomology Programs in South America and for FAO in Ankara, Turkey, a member of the Agronomy Consult Team for the National Science Foundation of Brazil and an invited scientist at the National Institute of Agro-Environmental Sciences, Tsukuba, Japan. He is an honorary member, president and currently international delegate of the Entomological Society of Brazil.

Tiago Lucini received his PhD from the Federal University of Paraná, Brazil in 2016 and, from 2017 to 2020, was a postdoc at the National Wheat Research Center of Embrapa, Brazil, where he is currently a research assistant. His research interests focus on the bioecology and interactions of heteropterans with their wild and cultivated host plants, and the electrical monitoring of the feeding behavior of stink bugs. He has participated in pioneering publications on the use of EPG on phytophagous pentatomids.

Paula Levin Mitchell received her Ph.D. in Zoology from The University of Texas at Austin (USA) in 1980 and subsequently held a four-year postdoctoral appointment in Entomology at Louisiana State University. After teaching for 25 years in the Biology Department at Winthrop University in South Carolina (USA), she retired as Professor Emerita. She continues to curate the insect collection at Winthrop University and is active in entomological educational outreach. Her specialty is coreid and pentatomid biology, with research interests encompassing feeding behavior, egg parasitoids, and the use of neem extracts to control heteropteran crop pests. She was a Fulbright Senior Research Scholar in India and a Visiting Fellow at the University of Delhi and has served as co-editor of the Journal of Economic Entomology. Her publications include 29 research articles and 3 book chapters