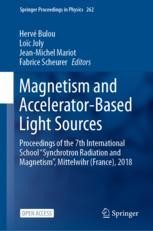 This open access book collects the contributions of the seventh school on Magnetism and Synchrotron Radiation held in Mittelwihr, France, from 7 to 12 October 2018. It starts with an introduction to the physics of modern X-ray sources followed by a general overview of magnetism. Next, light / matter interaction in the X-ray range is covered with emphasis on different types of angular dependence of X-ray absorption spectroscopy and scattering. In the end, two domains where synchrotron radiation-based techniques led to new insights in condensed matter physics, namely spintronics and superconductivity, are discussed. The book is intended for advanced students and researchers to get acquaintance with the basic knowledge of X-ray light sources and to step into synchrotron-based techniques for magnetic studies in condensed matter physics or chemistry.

Hervé Bulou is CNRS Researcher at the Institute of Physics and Chemistry of Materials of Strasbourg. After a Ph.D. thesis in experimental condensed matter physics, he became a specialist of multi-scale analysis, using Monte Carlo techniques, molecular dynamics, DFT and more recently, TDDFT. He studies structural, electronic, magnetic and optical properties of metallic atoms and molecules on surfaces. He is Co-Organizer of the Mittelwihr school on synchrotron radiation and magnetism.

Loïc Joly has a Ph.D. devoted to the spin precession of a spin-polarized electron beam upon reflection on a ferromagnetic film. After his Ph.D. in Strasbourg, he moved to the Swiss Light Source where he was in charge of photoemission electron microscope experiments. He is now Research Engineer at the University of Strasbourg and the Institute of Physics and Chemistry of Materials of Strasbourg. He is also Associate Engineer at the DEIMOS beamline at synchrotron SOLEIL, where he contributes to the instrumental development of the beamline since its opening in 2009.

Jean-Michel Mariot has been Teacher and Researcher in Physical Chemistry for around 45 years. He gathers broad experience in the field of condensed matter investigated by high energy spectroscopies, namely X-ray absorption and emission, X-ray inelastic scattering, Auger and photoelectron spectroscopy, surface and interface physics, magnetic materials and nanostructures. Currently, he is Professor Emeritus at Sorbonne Université (Paris), and he is still deeply involved in experimental work carried out at the various international synchrotron radiation centers, where he often worked as Visiting and Associate Scientist.

Fabrice Scheurer is CNRS Researcher at the Institute of Physics and Chemistry of Materials of Strasbourg. His first research interest was devoted to the growth of ultrathin magnetic films. Later he studied magnetic effects of magnetic nanoclusters, self-organized on surfaces. Consequently, he moved to the study of the electronic and magnetic properties of molecules deposited in ultra-high vacuum on metallic surfaces. He notably uses X-ray dichroism to investigate these systems. He is Associate Researcher at the DEIMOS beamline at synchrotron SOLEIL, and Organizer of the recurrent school on synchrotron radiation and magnetism held in Mittelwihr (France).