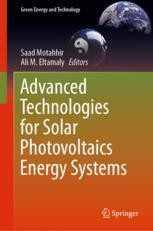 This book presents a detailed description, analysis, comparison of the latest research and developments in photovoltaic energy. Discussing everything from semiconductors to system integration, and applying various advanced technologies to stand alone and electric utility interfaced in normal and abnormal operating conditions of PV systems, this book provides a thorough introduction to the topic.

This book brings together research from around the world, covering the use of technologies such as embedded systems, the Internet of things and blockchain technologies for PV systems for different applications including controllers, solar trackers and cooling systems.

The book is of interest to electronic and mechanical engineers, researchers and students in the field of photovoltaics.

Saad Motahhir (Eng., Ph.D., IEEE member) has previous expertise acting in industry as Embedded System Engineer at Zodiac Aerospace morocco from 2014 to 2019 and more recently became Professor at ENSA, SMBA University, Fez, Morocco, since 2019. He received the engineering degree in embedded system from ENSA Fez in 2014. He received his Ph.D. degree in Electrical Engineering from SMBA University in 2018. He has published a good number of papers in journals and conferences in the last few years, most of which are related to photovoltaic (PV) solar energy and embedded systems. He published number of patents in Morocco patent office. He acted as Guest Editor of different special issues and topical collections. He is a reviewer and in the editorial board of different journals. He was associated with more than 30 international conferences as a Program Committee/Advisory Board/Review Board member.

Ali Mohamed Eltamaly (Ph.D., 2000) is Full Professor at Mansoura University, Egypt, and King Saud University, Saudi Arabia. He received the B.Sc. and M.Sc. degrees in Electrical Engineering from Al-Minia University, Egypt, in 1992 and 1996, respectively. He received his Ph.D. degree in Electrical Engineering from Texas A&M University in 2000. His current research interests include renewable energy, smart grid, power electronics, motor drives, power quality, artificial intelligence, evolutionary and heuristic optimization techniques, and distributed generation. He published 20 book and book chapters, and he has authored or coauthored more than 200 refereed journal and conference papers. He published several patents in the US patent office. He has supervised several M.S. and Ph.D. theses and worked on several national/international technical projects. He got distinguished professor award for scientific excellence, Egyptian Supreme Council of Universities, Egypt, June 2017, and he has awarded many prizes in different universities in Egypt and Saudi Arabia. He is participating as Editor and Associate Editor in many international journals and chaired many international conferences’ sessions. He is Chair Professor of Saudi Electricity Company Chair in power system reliability and security, King Saud University, Riyadh, Saudi Arabia.