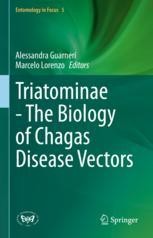 This book aims to present updated knowledge on various aspects of the natural history, biology, and impact of triatomines to all interested readers. Each chapter will be written by authorities in the respective field, covering topics such as behavior, neurophysiology, immunology, ecology, and evolution. The contents will consider scientific, as well as innovative perspectives, on the problems related to the role of triatomine bugs as parasite vectors affecting millions in the Latin American region.

Alessandra Guarneri, Ph.D., is a biologist and specialist in Medical Entomology. She is a researcher in the Vector Behavior and Pathogen Interaction Group at Oswaldo Cruz Foundation in Belo Horizonte, Brazil. Her research team is devoted to the study the behavior of triatomines and the interaction between these bugs and their natural parasites. Her work includes studies about parasite development and virulence, behavioral alterations in infected insects, as well as the molecular bases of the trypanosome-triatomine interaction.

Marcelo G Lorenzo, Ph.D., is a biologist devoted to the study of insect physiology with an emphasis on behavioral physiology. He is a senior researcher in the Vector Behavior and Pathogen Interaction Group at Oswaldo Cruz Foundation in Belo Horizonte, Brazil. There, his group investigates the behavior, pheromones, kairomones,  sensory physiology, and functional genomics of triatomines and culicids. The group also focuses on the development of baits and traps for vector control. His work takes advantage of techniques from neurobiology, analytical chemistry, molecular biology, genomics, and behavior.