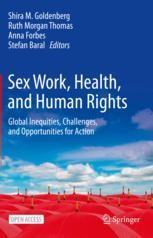 eBook
Access this book for free
Hardcover $59.99
price for USA in USD

Sex workers face severe health and social inequities, largely as the result of structural factors including punitive and criminalized legal environments, stigma, and social and economic exclusion and marginalization. Although previous work has largely emphasized an elevated burden and gaps in HIV and sexually transmitted infection (STI) services in sex work, less attention has been paid to the broader health and human rights concerns faced by sex workers. This contributed volume addresses this gap.

The chapters feature a variety of perspectives including academic, community, implementing partners, and government to synthesize research evidence as well as lessons learned from local-level experiences across different regions, and are organized under three parts:

Shira Goldenberg, PhD (she/her), is the Director of Research Education at the Centre for Gender and Sexual Health Equity (CGSHE) and an Assistant Professor in the Faculty of Health Sciences at Simon Fraser University in British Columbia (BC), Canada. She is also adjunct faculty in the University of California, San Diego School of Medicine.

Dr. Goldenberg has conducted research on sexual health, violence, and human rights for im/migrants, sex workers, and young women since 2006. Her work has informed global policy initiatives and guidelines related to sex workers’, women’s and im/migrants’ health, including through informing international guidelines with the Joint United Nations Programme on HIV/AIDS (UNAIDS) and the International Association for Providers of AIDS Care.

Dr. Goldenberg’s work has demonstrated the serious health and social inequities faced by im/migrants and sex workers in Canada and internationally, with a particular focus on sexual health and HIV, labour rights, and access to health services. She is Principal Investigator (PI) of An Evaluation of Sex Workers’ Health Access (AESHA), an ongoing longitudinal, community-based cohort study focused on sexual health, human rights, and access to care among women sex workers in Vancouver, BC. Dr. Goldenberg also leads the Evaluating Inequities in Refugee and Immigrant Women’s Sexual and Reproductive Health Access (IRIS) Study with colleagues in BC. Her research employs qualitative, epidemiological, and community-based research approaches. Dr. Goldenberg is passionate about the role of community engagement and partnerships for ensuring ethical and effective approaches to research, programmes, and policy to advance the health and well-being of marginalized communities.

Ruth Morgan Thomas, BA (she/her) has been involved in sex work for 40 years: 8 years as a full-time sex worker, 2.5 years as an academic researcher looking at HIV-related risks in the sex industry and more than 30 years as a sex workers’ rights advocate campaigning for, developing and maintaining services and support for sex workers within a human rights and labour framework.

Ruth was one of the eleven founding members of the Scottish Prostitutes Education Project (SCOT-PEP) set up in 1989 by sex workers for sex workers in Edinburgh, which she managed for 20 years.

In 2004 Ruth joined with other sex workers and allies across Europe to organise the European Conference on Sex Work, Human Rights, Labour and Migration and was Chair of the International Committee on the Rights of Sex Workers in Europe (ICRSE) until 2010.

Ruth was one of the founding members of the Global Network of Sex Work Projects (NSWP) in 1992 and has been employed as their Global Coordinator since 2010. She currently co-chairs the UNAIDS Steering Committee on HIV and Sex Work on behalf of the NSWP and represents NSWP in the recently formed Sex Worker Inclusive Feminist Alliance (SWIFA).

In 2012, Ruth coordinated the Sex Worker Freedom Festival: the alternative IAC2012 event for sex workers and their allies in protest at the legal travel restrictions imposed upon sex workers by the US government and is a member of the Core Group organising HIV2020 online for the same reason.

Anna Forbes, MSS (she/her), is an independent consultant. Her career as a community organizer, writer, public policy strategist, and women’s health activist has been evolving since 1978. In 1985, she was hired by Philadelphia’s first HIV/AIDS organization as their first case manager. Over the next 13 years, she worked with local organizations, including Philadelphia’s Health Department, to mobilize services and build understanding of HIV/AIDS. Her output ranged from a series of children’s books on AIDS to a course on “public policy through the lens of HIV” taught at Bryn Mawr College in Bryn Mawr, Pennsylvania. With ACT UP, Forbes was repeatedly arrested in civil disobedience actions highlighting the HIV/AIDS crisis.

In 1998, she joined the Global Campaign for Microbicides (GCM), an international effort to address women’s urgent need for user-controlled HIV prevention tools. As Deputy Director, she worked with local GCM staff and civil society groups in Asia, Africa, North America and Europe, building demand for microbicide research and development. She specialized in mobilizing sex workers and young women, key constituencies particularly in need of such products. The 2012 International Microbicides Conference awarded her the Omololu Falobi Award for Excellence in HIV Prevention Research Community Advocacy.

Now a writer and consultant, her client list included UNAIDS; the Global Network of Sex Work Projects; University of the Witwatersrand Reproductive Health and HIV Institute in Johannesburg, South Africa; the US Department Health and Human Services; and Open Society Foundations, among many others. Currently, she is working to raise public awareness of how criminalizing sex work both violates human rights and facilitates HIV transmission.

Stefan Baral, MD, MPH (he/him), is a physician epidemiologist and the Director of the Key Populations Program at the Center for Public Health and Human Rights in the Department of Epidemiology at the Johns Hopkins School of Public Health in Baltimore, Maryland.

Stefan completed his training at the University of Toronto in Community Medicine as a Fellow of the Royal College of Physicians and Surgeons of Canada and Family medicine with the Canadian Council of Family Physicians and provides clinical care through the Inner-City Health Associates in Toronto.

Through his role as the Director of the Key Populations Program in the Center for Public Health and Human Rights, Stefan has focused on trying to understand why people continue to be at risk for acquiring and transmitting HIV with a focus on the interactions of structural- and network-level determinants with individual-level proximal risks for HIV infection. Together with colleagues, Stefan focuses on using all scientific tools available to characterize the distribution of HIV risks including in countries with broadly generalized HIV epidemics. Consequently, this work has included studying the burden of HIV and HIV-related vulnerabilities among gay, bisexual, and other men who have sex with men, transgender women, people who use drugs, and sex workers in a range of HIV epidemic settings.  In response to the disproportionate burden of HIV among populations with specific vulnerabilities, Stefan has participated in advancing the standardization of methods and measures in HIV-related implementation research to study how best to implement programs serving marginalized communities.

eBook
Access this book for free
Hardcover $59.99
price for USA in USD