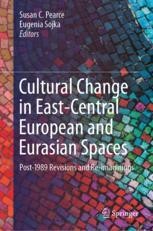 This book weaves together research on cultural change in Central Europe and Eurasia: notably, Bosnia and Herzegovina, Kazakhstan, Latvia, Poland, Russia, and Ukraine. Examining massive cultural shifts in erstwhile state-communist nations since 1989, the authors analyze how the region is moving in both freeing and restrictive directions. They map out these directions in such arenas as LGBTQ protest cultures, new Russian fiction, Polish memory of Jewish heritage, ethnic nationalisms, revival of minority cultures, and loss of state support for museums. From a comparison of gender constructions in 30 national constitutions to an exploration of a cross-national artistic collaborative, this insightful book illuminates how the region’s denizens are swimming in changing tides of transnational cultures, resulting in new hybridities and innovations. Arguing for a decolonization of the region and for the significance of culture, the book appeals to a wide, interdisciplinary readership interested in cultural change, post-communist societies, and globalization.

Susan C. Pearce holds her PhD in Sociology from the New School for Social Research and is Associate Professor of Sociology at East Carolina University in North Carolina, United States. She has served on the faculties of Gettysburg College; University of Gdansk, Poland; and West Virginia University. Among her research interests are sociology of culture, human rights, race, social movements, immigration, and gender. She is co-author of the book Immigration and Women: Understanding the American Experience (with Elizabeth J. Clifford and Reena Tandon) and co-editor of the books Mosaics of Change: The First Decade of Life in the New Eastern Europe (with Eugenia Sojka); and Istanbul: Living with Difference in a Global City (with Nora Fisher-Onar).

Eugenia Sojka, Ph.D., D. Litt., is an Associate Professor at the Institute of Literary Studies, University of Silesia, Poland, Adjunct Professor at the Department of English, UFV, Canada. She holds a Ph.D. in English with a specialization in Canadian literature from Memorial University of Newfoundland. Her interests focus on Indigenous and minority literatures and cultures in Canada and Upper Silesia. She is the author of numerous journal publications in the area of Canadian and English Studies and critical theory. She is also the editor and co-editor of the books: (De)Constructing Canadianness. Myth of the Nation and Its Discontents; Mosaics of Change: The First Decade of Life in the New Eastern Europe (with Susan C. Pearce); Embracing Otherness. Canadian Minority Discourses in Transcultural Perspectives (with Tomasz Sikora); and Państwo, Naród, Tożsamość w Dyskursach Kulturowych Kanady [State, Nation, Identity in Canadian Cultural Discourses] (with M.Buchholtz). As a Director of Canadian Studies Centre at the University of Silesia, she organized and co-organized conferences, workshops, as well as many lectures and readings by Canadian writers, artists and academics.