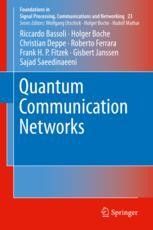 Riccardo Bassoli is senior researcher at Deutsche Telekom Chair of Communication Networks at Faculty of Electrical and Computer Engineering at Technische Universität Dresden (Germany). He received his B.Sc. and M.Sc. degrees in Telecommunications Engineering from University of Modena and Reggio Emilia (Italy) in 2008 and 2010 respectively. Next, he received his Ph.D. degree from 5G Innovation Centre at University of Surrey (UK), in 2016. He was also a Marie Curie ESR at Instituto de Telecomunicações (Portugal) and visiting researcher at Airbus Defence and Space (France). Between 2016 and 2019, he was postdoctoral researcher at University of Trento (Italy). He is IEEE and ComSoc member. He is also member of Glue Technologies for Space Systems Technical Panel of IEEE AESS.

Sajad Saeedinaeeni received the B.S. and M.S. degrees in Physics from Royal Holloway University of London in 2010 and Leipzig University in 2015, respectively. He wrote his Master's thesis on Quantum Hypothesis Testing at Max Planck Institute for Mathematics of Leipzig. He is currently working toward the Dr.-rer.nat degree in Physics at the Institute of Theoretical Information Technology of the Technische Universität München (TUM) under supervision of Holger Boche.