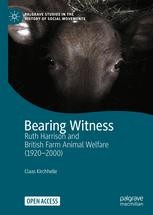 This open access book is the biography of one of Britain’s foremost animal welfare campaigners and of the  world of activism, science, and politics she inhabited. In 1964, Ruth Harrison’s bestseller Animal Machines  triggered a gear change in modern animal protection by popularising the term ‘factory farming’ alongside a new way of thinking about animal welfare. Here, historian Claas Kirchhelle explores Harrison’s avant-garde  upbringing, Quakerism, and how animal welfare debates were linked to concerns about the wider ethical and environmental trajectories of post-war Britain. Breaking the myth of Harrison as a one-hit wonder, Kirchhelle reconstructs Harrison’s 46 years of campaigning and the rapid transformation of welfare politics and science during this time. Exacerbated by Harrison’s own actions, the decades after 1964 saw a polarisation of animalpolitics, a professionalisation of British activism, and the rise of a new animal welfare science. Harrison’s belief in incremental reform allowed her to form ties to leading scientists but alienated her from more radical  campaigners. Many of her 1964 demands gradually became part of mainstream politics. However, farm animal welfare’s increasing marketisation has also led to a relative divorce from the wider agenda of social improvement that Harrison once bore witness to. This is the first book to cast light on the interlinked histories of British farm animal welfare activism, science, and legislation. Its unique scope allows it to go beyond existing accounts of modern British animal welfare and will be of interest to those interested in animal welfare, environmentalism, and the behavioural sciences.

Claas Kirchhelle (DPhil, Oxon 2015) is a medical historian and Lecturer at University College Dublin, with a Wellcome Trust University Award. His award-winning research and public engagement (Back from the Dead - Demystifying Antibiotics 2016-2017; Typhoidland 2020-2022) explore the interconnected evolution of modern science, politics, and the environment. His previous publications include Pyrrhic Progress. The History of Antibiotics in Anglo-American Food Production, which won the 2020 Turriano Prize.

“For millions of farm animals, the world started to change for the better after Ruth Harrison wrote "Animal Machines" and laboured for many years on UK and International committees. Ruth always believed that there is only one biology and that differences between humans and other species are much smaller than many people thought. Claas Kirchelle explains beautifully how Ruth came to have such dramatic impact in Bearing Witness.” (Donald M. Broom, Professor Emeritus of Animal Welfare, University of Cambridge, UK)

“A fascinating biography of a woman who changed the way the world treats farm animals, this book fills an important gap in the history of animal welfare.” (Marian Stamp Dawkins, CBE FRS, Professor of Ethology, Department of Zoology, University of Oxford, UK)

“By following Ruth Harrison’s career, Kirchhelle skilfully amalgamates biography with an analysis of British social, intellectual, and political life in the postwar years, charting the growing importance of animal welfare as a matter of concern. This book is a welcome and important contribution in an area that is ripe for sustained historical investigation.” (Dmitriy Myelnikov, Historian of Science and Animal Welfare, University of Manchester, UK)