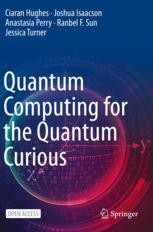 Quantum Computing for the Quantum Curious

This open access book makes quantum computing more accessible than ever before. A fast-growing field at the intersection of physics and computer science, quantum computing promises to have revolutionary capabilities far surpassing “classical” computation. Getting a grip on the science behind the hype can be tough: at its heart lies quantum mechanics, whose enigmatic concepts can be imposing for the novice.
This classroom-tested textbook uses simple language, minimal math, and plenty of examples to explain the three key principles behind quantum computers: superposition, quantum measurement, and entanglement. It then goes on to explain how this quantum world opens up a whole new paradigm of computing.
The book bridges the gap between popular science articles and advanced textbooks by making key ideas accessible with just high school physics as a prerequisite. Each unit is broken down into sections labelled by difficulty level, allowing the course to be tailored to the student’s experience of math and abstract reasoning. Problem sets and simulation-based labs of various levels reinforce the concepts described in the text and give the reader hands-on experience running quantum programs.
This book can thus be used at the high school level after the AP or IB exams, in an extracurricular club, or as an independent project resource to give students a taste of what quantum computing is really about. At the college level, it can be used as a supplementary text to enhance a variety of courses in science and computing, or as a self-study guide for students who want to get ahead. Additionally, readers in business, finance, or industry will find it a quick and useful primer on the science behind computing’s future.

Ciaran Hughes received his PhD in Theoretical Physics from the University of Cambridge. Afterwards, he moved to the Theoretical Physics Division at the Fermi National Accelerator Laboratory. His research involves understanding how the smallest particles in the universe talk to one another in order to create the world we live in. Particularly, his research includes calculating quantum phenomena associated with the strong force of nature using high performance computing and quantum computing. Utilizing these techniques, his research strives to find new particles and forces of nature which have never been seen before.

Joshua Isaacson obtained his undergraduate degree from Case Western Reserve University and his PhD from Michigan State University in physics. He is currently working as a postdoctoral researcher at Fermi National Accelerator Laboratory. His research interests are fairly broad, ranging from simulating events at the Large Hadron Collider to topics related to quantum computing. He became involved with quantum computing as a means to improve the algorithms used at the Large Hadron Collider.Anastasia Perry earned her M.S. in Physics from Kiev University in Ukraine, where she did research in mathematical physics. She taught undergraduate physics labs at Rutgers University in New Jersey and Lewis University in Illinois. Anastasia completed her M.A. in Secondary Education, and during an internship at Fermilab she collaborated on developing high school modules for quantum computing. Currently, she teaches physics at Illinois Mathematics and Science Academy. Anastasia is committed to supporting underrepresented students and engaging them in advanced topics in physics. Ranbel Sun graduated from MIT with a B.S. and M.Eng in Electrical Engineering. She went on to teach high school physics and math at independent schools for 7 years, most recently at Phillips Academy in Andover. Her teaching philosophy focused on developing problem-solving skills and empowering students to take ownership over their learning. She introduced quantum computing into the high school classroom in 2019 and continues to pursue interests at the intersection of education and engineering.

Jessica Turner received her education in Glasgow and Durham (UK) before accepting a postdoctoral research position at Fermi National Accelerator Laboratory in 2017. She is currently a faculty member at the University of Durham. Her research interests include theoretical particle physics and cosmology and she is particularly fascinated by neutrinos which are the most elusive known particles.