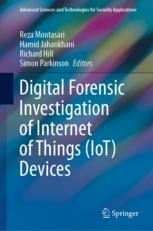 This book provides a valuable reference for digital forensics practitioners and cyber security experts operating in various fields of law enforcement, incident response and commerce. It is also aimed at researchers seeking to obtain a more profound knowledge of Digital Forensics and Cybercrime. Furthermore, the book is an exceptional advanced text for PhD and Master degree programmes in Digital Forensics and Cyber Security. Each chapter of this book is written by an internationally-renowned expert who has extensive experience in law enforcement, industry and academia.

The increasing popularity in the use of IoT devices for criminal activities means that there is a maturing discipline and industry around IoT forensics. As technology becomes cheaper and easier to deploy in an increased number of discrete, everyday objects, scope for the automated creation of personalised digital footprints becomes greater. Devices which are presently included within the Internet of Things (IoT) umbrella have a massive potential to enable and shape the way that humans interact and achieve objectives. These also forge a trail of data that can be used to triangulate and identify individuals and their actions. As such, interest and developments in autonomous vehicles, unmanned drones and ‘smart’ home appliances are creating unprecedented opportunities for the research communities to investigate the production and evaluation of evidence through the discipline of digital forensics.

Reza Montasari is a Senior Lecturer in Cyber Threats in the Hillary Rodham Clinton School of Law at Swansea University. Reza’s main research interests lie in the areas of Digital Forensics, Cyber Threats and Cyber Security but also include Cyber Terrorism, Cyber Law, Cyber Criminology and Digital Policing. Reza has significant experience in conducting Digital Forensic investigations within complex computing environments such as Internet of Things (IoT) and Cloud Computing (CC). His work is also focused on the security challenges around emerging technologies such as unmanned aerial vehicles (UAVs), blockchain and cryptocurrency. Reza has worked with a number of UK police forces and has given a number of invited talks including his recent presentation at the College of Policing and The Investigator Spring National Digital Media Investigator’s (DMI) Conference (Oxford, UK., 2019). Reza is a Fellow of Higher Education Academy (FHEA), a Chartered Engineer (CEng), a Member of the Institution of Engineering and Technology (IET), and a Member of the Chartered Society of Forensic Sciences (MCSFS).

Hamid’s principal research area for a number of years has been in the field of cyber security, information security and digital forensics. In partnership with the key industrial sectors, he has examined and established several innovative research projects that are of direct relevance to the needs of UK and European information security, digital forensics industries, Critical National Infrastructure and law enforcement agencies. Hamid has planned, proposed and managed several collaborative projects, and secured a substantial research income of up to £6m.

Jahankhani is the Editor-in-Chief of the International Journal of Electronic Security and Digital Forensics, and International Journal of Electronic Democracy, both published by Inderscience, and General Chair of the annual International Conference on Global Security, Safety and Sustainability (ICGS3). Hamid has edited and contributed to over 20 books and has over 150 conference and journal publications together with Various BBC radio interviews. Hamid has supervised to completion 13 Ph.D. and professional doctorate degree students and overseen 67 Ph.D. students progressing. In summer 2017, Hamid was trained as the GCHQ “cyberist” to train the next generation of cyber security experts through GCHQ CyberFirst initiative. Recently, Hamid trained over 100 frontline police officers in three of the largest London Boroughs.

Richard Hill is the Head of the Department of Informatics at the University of Huddersfield. Richard has held a number of academic teaching, research and academic management posts over the last 17 years. Richard’s primary research interest relates to how we can build intelligent systems that demonstrate agency and autonomy. Richard has widely published in the areas of cloud computing, Internet of things (IoT), digital forensics and cyber security. He is particularly interested in the use of agency as a design abstraction, and more recently, how multiagent systems can inform the design of large-scale interconnected networks, to be found in “edge computing” and Internet of things (IoT) architectures. Richard also has significant experience in the areas of digital forensics and cyber security.

Simon Parkinson is a Reader in Cyber Security within the School of Computing and Engineering at the University of Huddersfield. He received the first class degree (hons.) in Secure and Forensic Computing from the University of Huddersfield. Following this, he gained a Ph.D. entitled the Construction of Machine Tool Calibration Plans Using Domain-Independent Automated Planning. Simon’s research interest is in developing intelligent systems for manufacturing and cyber security. This involves his continuing research of developing and utilising artificial intelligence for task automation. His research interests are cyber security focussed as cover aspects such as access control, vulnerability and anomaly detection, learning domain knowledge, mitigation planning, and software tools to aid situation awareness. Simon has widely published in the areas of digital forensics, cyber security and artificial intelligence.