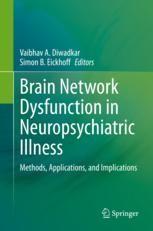 Brain network function and dysfunction is the dominant model for understanding how the brain gives rise to normal and abnormal behavior. Moreover, neuropsychiatric illnesses continue to resist attempts to reveal an understanding of their bases. Thus, this timely volume provides a synthesis of the uses of multiple analytic methods as they are applied to neuroimaging data, to seek understanding of the neurobiological bases of psychiatric illnesses, understanding that can subsequently aid in their management and treatment. A principle focus is on the analyses and application of methods to functional magnetic resonance imaging (fMRI) data. fMRI remains the most widely used neuroimaging technique for estimating brain network function, and several of the methods covered can estimate brain network dysfunction in resting and task-active states.

Additional chapters provide details on how these methods are (and can be) applied in the understanding of several neuropsychiatric disorders, including schizophrenia, mood disorders, autism, borderline personality disorder, and attention deficit hyperactivity disorder (ADHD). A final complement of chapters provides a collective overview of how this framework continues to provoke theoretical advances in our conception of the brain in psychiatry. This unique volume is designed to be a comprehensive resource for imaging researchers interested in psychiatry, and for psychiatrists interested in advanced imaging applications.

Dr. Vaibhav Diwadkar is Professor of Psychiatry & Behavioral Neurosciences at Wayne State University School of Medicine. He received his B.A. in Psychology and Computer Science from Coe College, and his PhD in Psychology and Cognitive Science from Vanderbilt University. Following neuroimaging-related fellowships at Carnegie Mellon University and the University of Pittsburgh, he has served on the faculty of the University of Pittsburgh, and at Wayne State University where he has been since 2005. He uses in vivo neuroimaging to understand mechanisms of brain network function (underlying psychological and physiological processes), publishing in the areas of learning, memory, cognition and sensorimotor function, and thermoregulation. His clinical neuroimaging interests lie in understanding brain network dysfunction in psychiatry, leading to publications on schizophrenia, mood disorders, obsessive compulsive disorder, and borderline personality disorder. His research is supported by the National Institutes of Mental Health, the Children's Research Center of Michigan, the Children’s Hospital of Michigan Foundation, the Ethel and James Flinn Foundation, the DMC Foundation, the Cohen Neuroscience Endowment, the Prechter World Bipolar Foundation, the Jack Dorsey Endowment, and the National Alliance for Research on Schizophrenia and Depression (now the Brain and Behavior Research Foundation).

Simon Eickhoff is a full professor and chair of the Institute for Systems Neuroscience at the Heinrich-Heine University in Düsseldorf and the director of the Institute of Neuroscience and Medicine (INM-7, Brain and Behavior) at the Forschungszentrum Jülich. He is furthermore a visiting professor at the Chinese Academy of Science Institute of Automation. Workig at the interface between neuroanatomy, data-science and brain medicine, the he aims to obtain a more detailed characterization of the organization of the human brain and its inter-individual variability in order to better understand its changes in advanced age as well as neurological and psychiatric disorders. This goal is pursued by the development and application of novel analysis tools and approaches for large-scale, multi-modal analysis of brain structure, function and connectivity as well as by machine-learning for single subject prediction of cognitive and socio-affective traits and ultimately precision medicine.