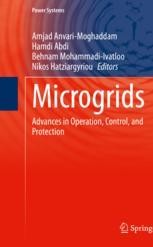 Advances in Operation, Control, and Protection

About this book
This book provides a comprehensive overview on the latest developments in the control, operation, and protection of microgrids. It provides readers with a solid approach to analyzing and understanding the salient features of modern control and operation management techniques applied to these systems, and presents practical methods with examples and case studies from actual and modeled microgrids. The book also discusses emerging concepts, key drivers and new players in microgrids, and local energy markets while addressing various aspects from day-ahead scheduling to real-time testing of microgrids. The book will be a valuable resource for researchers who are focused on control concepts, AC, DC, and AC/DC microgrids, as well as those working in the related areas of energy engineering, operations research and its applications to energy systems.

Behnam Mohammadi-Ivatloo, PhD, is a Senior Researcher at Aalborg University, Aalborg, Denmark and  Professor at the University of Tabriz, Tabriz, Iran, where he is head of the Smart Energy Systems Lab. Before joining the University of Tabriz, he was a research associate at Institute for Sustainable Energy, Environment and Economy, University of Calgary, Canada. He obtained his MSc and PhD degrees in electrical engineering from Sharif University of Technology, Tehran, Iran. His main areas of interest are renewable energies, micro grid systems, and smart grids. He is included in the 2018 and 2019 Thomson Reuters' list of the top 1% most cited researchers.

Nikos Hatziargyriou, PhD, received the Diploma in Electrical and Mechanical Engineering from National Technical University of Athens (NTUA), and the MSC and PhD degrees from the University of Manchester Institute of Science and Technology (UMIST), Manchester, UK. Since 1984 he has been with the Power Division of the Electrical and Computer Engineering Department of NTUA, and since 1995, he is full professor in Power Systems. He is founder of the "SmartRue" research unit of the Energy Systems Laboratory of the National Technical University of Athens. From April 2015 to May 2018 was Chairman and CEO and until November 2019 Chairman of the Board of the Hellenic Distribution Network Operator (HEDNO), the Distribution Utility of Greece. From February 2007 to September 2012, he was Deputy CEO of the Public Power Corporation (PPC) of Greece. He is the Editor-in-Chief of the IEEE Transactions on Power Systems, a member of the Editorial Board of IEEE Transactions on Sustainable Development and the IEEE Power and Energy magazine, and author of the book Microgrids: Architectures and Control.  He has co-authored more than 250 journal publications and 600 conference proceedings papers.  He is Fellow Member of IEEE, past Chair of the Power System Dynamic Performance Committee, Honorary member of CIGRE, and past Chair of CIGRE SC C6 “Distribution Systems and Distributed Generation”. He was chair, currently is vice-chair of the European Technology and Innovation Platform for Smart Networks for Energy Transition (ETIP-SNET) and a member of the Energy Committee of the Athens Academy of Science. He is included in the 2016, 2017 and 2019 Thomson Reuters' list of the top 1% most cited researchers.