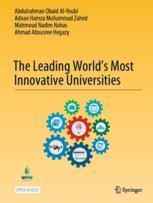 The Leading World’s Most Innovative Universities

This open access book is unique in its contents. No other title in the book market has tackled this important subject. It introduces innovation as a way of practice for world-class universities. It, then, discusses the criteria for being innovative in the academic world. The book selects some of the top innovative world-class universities to study the factors that qualified them to be innovative, so that any other university can follow their steps to become innovative. The final chapter of the book presents some recommendations in this regard.

Prof. Abdulrahman Obaid Al-Youbi is the President of King Abdulaziz University (KAU) since 2016 and a Professor of Chemistry at KAU since 2000. He earned a Ph.D. in Physical Chemistry from Essex University, UK in 1986. He is the President of the International Advisory Board (IAB) of KAU since 2015. Throughout his career, Prof. Al-Youbi is an active researcher in his specialization, a passionate teacher and an academic administrator. He participated in many research projects and published more than 150 papers in ranked scientific journals. He also supervised many graduate students. He has held a variety of Academic Administrative positions at KAU including Chairman of the Chemistry Department, Vice-Dean of the Faculty of Science (1992 -1999), Dean of the Faculty of Science (1999-2002), Vice President (2002- 2009), and Vice President for Academic Affairs (2009-2016).  In 2015-2016, he was Acting President of both KAU and Jeddah University.  As President of KAU, Prof. Al-Youbi has devoted his position to strengthen excellence in academics and research with a dedication to develop an innovative culture. Through President Al-Youbi’s leadership, KAU has remained the top university, not only in the Kingdom of Saudi Arabia, but also in the Arab World. His current focus is on expanding KAU’s leadership by continuing to build on its long-standing strengths in education, research, entrepreneurship and Community Service to the people of the Kingdom of Saudi Arabia.

Prof. Adnan Hamza Mohammad Zahed Consultant to the President of King Abdulaziz University (KAU) since 2016 and the Secretary- General of the International Advisory Board (IAB) of KAU since 2010. He was the KAU Vice President for Graduate Studies and Scientific Research (2009-2016), and worked before that as Dean of Graduate Studies (2007-2009), and before that he was Vice Dean of the Faculty of Engineering (1997-2007). Prof. Zahed is a full professor in the Chemical Engineering Department at KAU since 1996. He also worked in industry as General Supervisor (Consultant) in Saudi Badrah Company (Jeddah, KSA, 1995-1996), Deputy General Manager at Savola Food Company in Jeddah (1993-1995), and Deputy CEO of Tasali Company (Jeddah). He holds a B.Sc. in Chemical Engineering from King Fahd University of Petroleum and Minerals, KSA (1976), and a M.S and Ph.D. in Chemical Engineering from University of California (Davis), USA (1982). He published eleven books, one patent and more than 60 papers in international conferences and refereed journals, in addition to more than 75 technical reports written for many bodies of Saudi community. He also participated as a co-author of several University Guides such as the Graduate Studies Guide, Applicable Theses Guide, Thesis Writing Guide, Graduate Studies Procedure Guide, Faculty of Engineering Prospectus and Annual Report of Research Activities in Faculty of Engineering.  Prof. Zahed was included in Marquis Who's Who in the World 2006. He participated in four academic accreditation meetings in USA, and in more than 25 local and international conferences, symposia and forums. Prof. Zahed visited a number of American universities as a delegate of the Saudi Ministry of Education.

Prof. Nahas worked as Consultant to the Vice President of Graduate Studies and Scientific Research of King Abdulaziz University (KAU) for about ten years. He then became the consultant of the Secretary-General of the International Advisory Board (IAB) of KAU. Prof. Nahas has been a full professor in the Faculty of Engineering at KAU since 1996. He holds a BSc in Mechanical Engineering from Aleppo University, Syria (1973), and a MSc (1978) and a Ph.D. in Aeronautical Engineering from Cranfield University, UK (1981). He has published more than twenty books (including bilingual aerospace dictionary), one patent and more than 80 papers in international conferences and refereed journals, in addition to more than 35 classified technical reports. He taught many engineering courses and developed many curricula and study programs. Nahas is also fond of simplifying scientific issues to the public. He has published hundreds of articles in newspapers and magazines in this regard. He is a regular writer in two magazines.

Prof. Hegazy is a Professor of Mechanical Engineering at the Faculty of Engineering, Helwan University (Egypt) since 2001 and at King Abdulaziz University (KAU) since 2008. He earned a Ph.D. in Mechanical Engineering from Leeds University, UK in 1985. He has served as the consultant of the Secretary-General of the International Advisory Board (IAB) of KAU since 2010. He was a consultant of KAU Vice Presidency for Graduate Studies and Scientific Research (2009-2016). Prof. Hegazy earned a M.Sc. from Helwan University (HU) in Mechanical Engineering (1981). He was appointed Assistant Professor (1986) at HU, Associate Professor and later as a full Professor of Mechanical Engineering (2001). He held some Academic Administrative posts such as Chairman of the Production Engineering Department and Vice-Dean of the Faculty of Engineering (HU). Throughout his career, he has been an active researcher in powder metallurgy and engineering materials, a passionate teacher and an academic administrator. He has authored more than 40 scientific and academic publications and supervised over 10 graduate students. Prof. Hegazy was awarded the Overseas Research Students from Committee of Vice Chancellors and Principals of the Universities of the United Kingdom (1983-1985), a British Council award, UK (1987), and a Grant by the Foreign Relation Coordination Unit of the Supreme Council of Universities (Egypt) as a member of research teamwork in project titled (UEEIEMP).