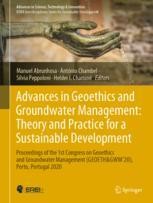 Advances in Geoethics and Groundwater Management : Theory and Practice for a Sustainable Development

Proceedings of the 1st Congress on Geoethics and Groundwater Management (GEOETH&GWM'20), Porto, Portugal 2020

This book gathers the peer-reviewed proceedings of the 1st congress on Geoethics & Groundwater Management (GEOETH&GWM'20), held in Porto, Portugal, in an online format on 18-22 May 2020. Hosted in School of Engineering (ISEP), Polytechnic of Porto based on Porto city (a UNESCO World Heritage Site), the international conference focused on what has now been dubbed “hydrogeoethics”, a novel transdisciplinary, scientific field integrating all dimensions of geoethics in groundwater science and practice. Given its scope, the book is of interest to all researchers and practitioners in the geosciences, hydrology, water resources, hydrogeology, natural resources management, environment, engineering, law, sociology, education, philosophy, culture, among others.

The diversity, scale, significance and increasing magnitude of anthropogenic interactions with aquifers and groundwater, which often involve conflicting values or interests, call for analysis, discussions and decisions on the part of the agents involved, e.g. groundwater scientists, policymakers, managers, organisations, professionals and citizens. This approach calls for a responsible, sustainable and human approach to groundwater use and management.

The groundwater community involved in the exploration and exploitation, use and management of this increasingly vital natural resource is becoming more and more aware that ethical issues pervade all our attitudes from concept to action and need to be addressed. Diverse values and cultures, science and education, law and policies, human and natural environments and the public and the economic sectors view groundwater and its value and/or role differently. The authors believe that in a globalised and interconnected world, common ground must be found in the interest of peace, human development and sustainability.

The main topics covered here include:

1.   Fundamentals of hydrogeoethics: cultures, principles and geoethical values on groundwater science and engineering

2.   Lessons for a resilient and sustainable future with hydrogeoethics: case studies of geoethics in groundwater science-engineering, profession, and management

3. Scientific and humanistic components of hydrogeoethics in groundwater education and professional training

He began a full-time professional career as a Junior Geologist (Hydrogeology and Engineering Geology) in 1977, before graduation, pursuing studies and continuing his first job as a contracted helper to the practical classes of disciplines of his Geology course in the University of Porto, from 1974 up to 1980. In 1981, he became a partner and director in a small company of Applied Geology and Hydrogeology services. Since then, he directed and was author and co-author of innumerable projects aimed at the private and public sector until 2009. In 1981, after public exams, he became a Lecturer in Geology at the Faculty of Sciences of the University of Porto, having taught theoretical and practical classes in Hydrogeology, Engineering Geology, Sedimentary Petrology, Geomorphology, Geological Cartographic Methods, Mineralogy, Crystallography, Structural Geology and oriented pedagogic internships in secondary schools. He did research in hydrogeology of fractured media and participated in national and international research projects in this subject aiming water resources and groundwater management in the Minho region (NW Portugal) and in the optimisation of groundwater exploitation in complex well-field thin coastal sandy aquifer. Other active interest in science includes natural heritage studies and geoarchaeology with collaborations beginning since as a student with research groups in archaeology, ethnology and history. He was involved in 1990 in the foundation of the first academic course on Environmental Health and Hygiene that included curricula in geology and hydrogeology. He was also involved in a first master’s in Environmental Marketing. He is often called as Forensic Geology expert witness and as pro bono scientific advisor to cultural and natural heritage and environmental advocacy associations.

Since 2006, he is an independent Consultant Geologist. He is a member of several national and international scientific and professional associations. At the Portuguese Association for the Study of the Quaternary - APEQ - (publisher of Estudos do Quaternário /Quaternary Studies), he is the Secretary of the Board and is President of the AIH-GP – Portuguese Chapter of the International Association of Hydrogeologists (IAH). As an active member of the International Association for Promoting Geoethics (IAPG), he was invited in 2017 to his Board of Experts (Corresponding Citizen Scientists) in Geoethics in Groundwater Management. In 2018, he was jointly designated by IAH and IAPG as Chair of the international congress “Geoethics & Groundwater Management: Theory and Practice for a Sustainable Development”, in preparation, to be held at ISEP, Porto, Portugal, from 21 to 25 October 2019.

The ethics at the profession, in science production and in the applied Earth Sciences, has always been a concern and a guideline for his activities, a challenge for a geologist who, being born from a school oriented to the exploration and exploitation of geological resources in what he calls predatory geology, has gradually changed his priorities to become a Geoethics Advocate, an Environmental and Social Geologist for Sustainability.

He has been a teacher of hydrogeology in the Department of Geosciences of the University of Évora since 1985 and from 2003 to 2005 was President of the Department. He has also been an Invited Professor in the University of Algarve (Portugal), in the Universities Charles of Prague (Czech Republic), Huelva (Spain) and Sapienza Rome (Italy), under the ERASMUS Programme, and in the Institute of Transports and Communication (master’s in Environmental Impact Studies) in Maputo, Mozambique.

From 2002 to 2006, he was President of the South Chapter of the Portuguese Water Resources Association (APRH), and from 2004 to 2008, he was the President of the Portuguese Chapter of the International Association of Hydrogeologists (AIH-GP). He has been a member of IAH since 1988, and from 2008 to 2012, he was IAH Vice-President for Finance and Membership and 2012–2016 IAH Vice-President for Programme and Science Coordination. In 2007, he was Chair of the 35th IAH Congress in Lisbon. Nowadays, he is the President of IAH – The International Association of Hydrogeologists.

His international experience has been with UNESCO-IHP, with the World Water Council (WWC), having participated in the last World Water Fora (WWF) in South Korea in 2015 and Brasilia in 2018, and through the role of member of the Executive Committee of IAH in the last 12 years, he has organised and attended IAH congresses and other IAH regional or national meetings, as well as representing IAH in many other events around the World.

He has been co-authored numerous publications in journals, conference proceedings/full papers, book chapters, technical and professional papers, as well as co-edited several international special issues. In addition, he belongs to some editorial journal boards (e.g. Sustainable Water Resources Management, IAH+Springer). He was on many scientific and organising committees of national and international conferences.

S. Peppoloni is a skilled Ph.D. Geologist and Researcher at Italian Institute of Geophysics and Volcanology (INVG) in Rome, Italy, with over 20 years' experience in multidisciplinary applied geosciences research, consultancy and practice. Her professional activity covers the fields of engineering geology, geological hazards and risks, as well as geomorphology, geo-education and geoscience dissemination and communication. In addition, she is fully involved in the base research on Geoethics, focusing on ethical, social and cultural issues related to geosciences and promoting sustainability, prevention and geo-education as key concepts of the relationship between geoscientists and society.

Since 1999, she is engaged in some international projects on geological hazard and risks and recently in two H2020 European projects dealing with ethical issues: the Project ENVRI PLUS – Environmental Research Infrastructures Providing shared solutions for Science and Society, the Project GOAL: Geoethics Outcomes and Awareness Learning, and the Project EPOS SP: European Plate Observing System Sustainability Phase.

She was Adjunct Professor in Geology and Applied Geology at the Universities of Rome “Sapienza” and Viterbo “Tuscia”; member of the Experts Committee of the Ph.D. course: “Landscape and Environment”, at the University of Rome “Sapienza”; collaborator of some Italian universities and research institutes; teacher in courses on Disaster Risk Reduction (École Polytechnique Fédérale de Lausanne) and Seismic Damage on Cultural Heritage (European Project Interreg III C NOÈ).

Author and co-author of several publications in indexed journals, conference proceedings/full papers and book chapters, as well as co-editor of several international special issues and books (e.g., Elsevier, Springer, Geological Society of London, Annals of Geophysics), she is among the authors of the Geoethical Promise (the “Hippocratic-like Oath” for geoscientists) and the Cape Town Statement on Geoethics. In addition, she is a science writer, contributor of Italian newspapers and author of books on Earth Sciences intended for the general public. She has been awarded with prizes for science communication and natural literature in 2014, 2016 and 2017.

Presently, he is Head of the Laboratory of Cartography and Applied Geology (LABCARGA|ISEP) and Senior Researcher at Centre GeoBioTec|UA and Centre IDL|U.Lisbon, as well as belongs to the executive board of the M.Sc./B.Sc. Geotechnical and Geoenvironmental Engineering (OE+EUR-ACE Label) and the Department of Geotechnical Engineering (ISEP). Currently, he belongs to the board of the Portuguese Chapter of the International Association of Hydrogeologists (AIH-GP) and Portuguese Association of Geologists (APG). He was a board member of APGeom – Portuguese Association of Geomorphologists (2009–2013) and SPG – Portuguese Geotechnical Society (2016–2020). He was consultant and or responsible over 70 projects of rock engineering, applied geology, hydrogeomechanics, slope geotechnics, mining geology, exploration hydrogeology, hard-rock hydrogeology, water resources, urban groundwater and applied mapping (Mozambique, Portugal and Spain).

He has been co-authored over 200 publications in indexed journals, conference proceedings/full papers, book chapters, technical and professional papers. He co-edited 14 special volumes as well as is presently evolved in editing themed issues for some international journals (e.g. Geotechnical Research ICE, Springer Nature Applied Sciences, Mediterranean Geoscience Reviews, Sustainable Water Resources Management, Water MDPI, Arabian Journal of Geosciences). He has a wide activity as a referee for several international journals. He served as invited Expert Evaluator of Bologna Geoscience programme for DGES (Portugal) and Scientific Projects Evaluation for NCST (Kazakhstan) and NRF|RISA (South Africa), as well as Coordinator of “Geology on Summer/Ciência Viva” programme at ISEP for geosciences dissemination. He has been also active with teaching and supervising many Ph.D., M.Sc. and undergraduate students.