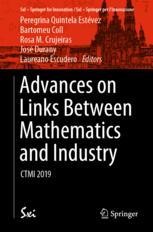 Advances on Links Between Mathematics and Industry

This book results from the talks presented at the First Conference on Transfer between Mathematics & Industry (CTMI 2019). Its goal is to promote and disseminate the mathematical tools for Statistics & Big Data, MSO (Modeling, Simulation and Optimization) and their industrial applications. In this volume, the reader will find innovative advances in the automotive, energy, railway, logistics, and materials sectors. In addition, Advances CTMI 2019 promotes the opening of new research lines aiming to provide suitable solutions for the industrial and societal challenges. Fostering effective interaction between Academia and Industry is our main purpose with this book. CTMI conferences are one of the main forums where significant advances in industrial mathematics are presented, bringing together outstanding leaders from business, science and Academia to promote the use of mathematics for an innovative industry.

Rosa M. Crujeiras is an Associate Professor at the Department of Statistics, Mathematical Analysis and Optimization at the University of Santiago de Compostela (Spain). She obtained her PhD in Mathematics in January 2007 and has been a post-doctoral researcher at the Institut de Statistique, Biostatistique et Sciences Actuarielles, Université Catholique de Louvain (Belgium). She has been the secretary of the Institut of Mathematics at the USC, and since June 2013 until January 2015 she was the vice-dean of the Faculty of Mathematics. Since January 2015 until June 2017, she was deputy of the Vice-rectorship for Communication and Coordination at USC, becoming vice-rector from that date until June 2018. She is also an associate researcher at the Technological Institute of Industrial Mathematics (ITMATI), participating in different projects with the industrial sector. Her research interest is focused on non-parametric statistical methods with application in environmental sciences.

José Durany, PhD degree from the University of Santiago de Compostela, Spain, in 1983. From 1979 till nowadays he worked at University Santiago de Compostela and University of Vigo, Spain, (Professor since 1992) with teach, research and management  responsibilities. His research interests are in the areas of Applied Mathematics:  finite element methods for partial differential equations and Glaciology and Tribology applications. He has published in international journals in these areas and he is author or co-author of over 40 papers JCR and more than 80 national or international congress presentations on these topics. He has been leader in some national and international research projects and industry contracts, and has attended as expert in many scientific and educational committees. Actually, he is Coordinator of the Master in Industrial Mathematics at University of Vigo, Spain, and member of the Steering Committee of the Technological Institute for Industrial Mathematics (ITMATI, Spain).

Laureano F. Escudero was born in Valladolid (Spain). He received the PhD. Degree in Economics from the Universidad Comercial de Deusto, Bilbao, Spain, in 1974. Currently, he is Professor of Statistics and Operations Research at the Universidad Rey Juan Carlos, Spain. In the period 2003-04 he was the President of EURO (Association of European Operational Research Societies).  He has worked at IBM Research, Scientific and Development Centers in Madrid (Spain), Palo Alto (California), Sindelfingen (Germany) and Yorktown Heights (NY), 1972-1991. He taught Mathematical Programming at the Mathematical Sciences School, Universidad Complutense de Madrid, 1992-2000 and Stochastic Programming at the Universidad Miguel Hernandez, Spain. He has held different positions at the IBERDROLA group, being the Manager of the Dept. of Decision Support Systems Engineering at IBERINCO (Iberdrola Ingeniería y Consultoría), 1997-1999. He has been Co-Editor-In-Chief of TOP, a journal of SEIO, the Spanish Statistics and Operations Research Society, 1993-2000, Editorial Board member of the European Journal of Operational Research, 1977-2006, and Management Board member of the non-profit network association Math-in.  He is the author of 6 books, has co-edited 4 others, and has published more than 150 scientific papers in JCR indexed journals. He has worked in different mathematical programming fields (linear, integer, nonlinear, stochastic) and its applications to energy power generation and maintenance planning, capacity generation expansion and trading under uncertainty, supply chain management under uncertainty and air traffic flow management under uncertainty, among other sectors.