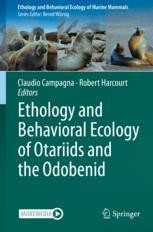 This book is focused on the marine mammalian groups the Otariidae and the Odobenidae, otherwise known as fur seals, sea lions and the walrus. In 30 chapters, more than 60 authors from 30 institutions and 13 nationalities, discuss a broad suite of topics from maternal care and mating behavior, through play, cognition and personality, to adaptation to life in the Anthropocene. The authors explore the behaviors that have allowed these semi-aquatic mammals to thrive in the marine realm. Many populations have recovered following historical decimation, with interesting evolutionary consequences which are explored. Detailed, selected, individual species descriptions are also provided, showcasing the behavioral diversity of this engaging, adaptive and highly successful group of marine mammals.

Dr Claudio Campagna is a conservation biologist with the Wildlife Conservation Society (WCS). He has an MD from the University of Buenos Aires, Argentina, and a PhD in Biology from the University of California, Santa Cruz. Most of his marine mammal research is located at Península Valdés, Argentine Patagonia. He has also been working on species-driven, marine conservation projects for three decades, and has been central to the creation of open ocean marine protected areas in Argentina. He has published nine books, including a children’s book on the biology of the southern elephant seal, and more than 150 scientific articles and popular essays. He has served on the Steering Committees of many conservation organizations, including the IUCN Species Survival Commission, and co-founded the Forum of NGOs for the conservation of the Patagonian Sea. Together with UCSC Philosopher Daniel Guevara, he founded the Language of Conservation Project, an innovative project which draws together the philosophy of language with the practice of biodiversity conservation.

Dr Rob Harcourt has a BSc (Hons) from The University of Adelaide and a PhD from the University of Cambridge.  His PhD included two years of field work in Peru studying maternal influences on pup development in the South American fur seal. He taught marine mammal ecology in Friday Harbor labs, University of Washington; and then in Baja California, Mexico followed by a postdoctoral fellowship on New Zealand fur seal ecology and Adelie Penguin behavior at the University of Otago, New Zealand. He has run the Marine Predator Research Group at Macquarie University in Sydney Australia since 1997 and been Leader of Australia’s Integrated Marine Observing System Animal Tracking Facility since 2007.  He has published widely on marine vertebrates with 1 book ‘Beyond the Breakers’, 28 book chapters and over 235 scientific publications. He has been blessed to supervise 35 amazing PhD and 29 Masters students and served on Australia’s National Marine Mammal Scientific Committee and on the Committee of Scientific Advisors for the Society for Marine Mammalogy.