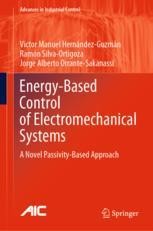 This book introduces a passivity-based approach which simplifies the controller design task for AC-motors. It presents the application of this novel approach to several classes of AC motors, magnetic levitation systems, microelectromechanical systems (MEMS) and rigid robot manipulators actuated by AC motors.

The novel passivity-based approach exploits the fact that the natural energy exchange existing between the mechanical and the electrical subsystems allows the natural cancellation of several high order terms during the stability analysis. This allows the authors to present some of the simplest controllers proposed in scientific literature, but provided with formal stability proofs. These simple control laws will be of use to practitioners as they are robust with respect to numerical errors and noise amplification, and are provided with tuning guidelines.

Energy-based Control of Electromechanical Systems is intended for both theorists and practitioners. Therefore, the stability proofs are not based on abstract mathematical ideas but Lyapunov stability theory. Several interpretations of the proofs are given along the body of the book using simple energy ideas and the complete proofs are included in appendices. The complete modeling of each motor studied is also presented, allowing for a thorough understanding.

IPN) in 2003. He has been a Professor at Universidad Autonoma de Queretaro since 1995, and has authored or co-authored around 50 journal articles and 2 books. His research interests include control of electromechanical systems, trajectory and path tracking control in mobile robots, and DC/DC Power Electronic Converters control.

Dr Ramón Silva-Ortigoza received his B.S. degree from Benemérita Universidad Autónoma de Puebla in 1999, and his M.S. and Ph.D. degrees from the Centro de Investigación y de Estudios Avanzados del Instituto Politécnico Nacional (CINVESTAV-IPN), Mexico City, Mexico, in 2002 and 2006, respectively. He has been a Researcher with the Department of Mechatronics & Renewable Energy, Instituto Politécnico Nacional (IPN), Centro de Innovación y Desarrollo Tecnológico en Cómputo (CIDETEC), since 2006, and belongs to SNI-CONACYT, Mexico. He has authored or co-authored over 55 journal articles, 40 conference papers, 3 books and was editor for the book ‘Mechatronics’.