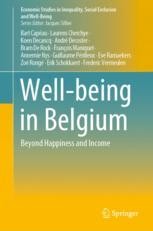 Beyond Happiness and Income

What constitutes a good life? For most people, well-being involves more than a high income or material prosperity alone. Many non-material aspects, such as health, family life, living environment, job quality and the meaningful use of time are at least as important. Together, these factors also influence the degree to which people are satisfied with their lives, and help to determine how happy they feel.

This book argues that happiness and life satisfaction do not form a good basis for measuring well-being, and proposes an alternative method that not only considers the various aspects of well-being, but also the fact that people have their own views on what is important in life.

Not limited just to theory, the book also presents a large-scale, representative survey involving more than 3000 adults from over 2000 Belgian families, which charted the various aspects of the individual well-being of Belgians. Focusing on the unequal distribution of these various aspects of well-being within families, the survey showed that some Belgians are more likely to suffer from cumulative deprivation in multiple dimensions. Based on this innovative study, the book describes which people in society are worst off – and these are not necessarily only people on low incomes or those who feel unhappy – and proposes that policymakers prioritise these individuals.

Bart Capéau (1963) holds a master’s degree in Philosophy and a PhD in Economics. He is a researcher at the Department of Economics at KU Leuven (Belgium).

Laurens Cherchye (1974) is a Full Professor at KU Leuven (Belgium). He has published in Econometrica, American Economic Review, Review of Economic Studies and the Journal of Political Economy. Together with Bram De Rock and Frederic Vermeulen he received the Belgian Francqui-Prize in 2019.

Koen Decancq (1980) is an Associate Research Professor at the Herman Deleeck Centre for Social Policy at the University of Antwerp. His research interests are the measurement of (multidimensional) inequality, poverty and well-being, with a focus on the incorporation of individual preferences and the role of social policies.

André Decoster (1958) is a Full Professor at the Department of Economics at KU Leuven (Belgium), where he lectures on introductory economics, public finances and the measurement of welfare, inequality and poverty. His research mainly focuses on the evaluation of tax systems, social security and public policy using micro-econometric simulation models.

Bram De Rock (1977) is a Full Professor at the Université libre de Bruxelles and KU Leuven (Belgium). He has published over 50 articles (mostly) on family economics in international journals, including Econometrica, American Economic Review, Review of Economic Studies and the Journal of Political Economy.

François Maniquet (1965) is a Full Professor at UCLouvain, in Louvain-la-Neuve. His research interests include welfare economics and public economics, with a focus on well-being measurement and the theory of optimal taxation. He received the Social Choice and Welfare Prize in 2004 and the Francqui Prize in 2010.

Guillaume Périlleux (1992) holds master’s degrees in Economics and in Advanced Research from the Université libre de Bruxelles (ULB). He is pursuing his PhD at the ULB in the area of family economics, focusing on how families make decisions about time use, consumption and incurring debts.

Eve Ramaekers (1977) has a PhD in Economics. She held positions at the University of Namur, UCLouvain and the Ecole Polytechnique near Paris. Focusing on welfare economics and game theory, her research findings have been published in Social Choice and Welfare and Games and Economic Behavior.

Erik Schokkaert (1954) is an economist and psychologist. He is affiliated with the Department of Economics at KU Leuven (Belgium) and chairs the steering committee of Metaforum, the interdisciplinary think tank at KU Leuven. He has published (among others) in the American Economic Journal: Applied, Journal of Public Economics, and Journal of Health Economics.

Frederic Vermeulen (1974) is a Professor of Economics at the University of Leuven (Belgium). He is a Research Fellow at the IFS (London) and the IZA (Bonn), and his interests focus on the economics of the household. In 2019, he was awarded the Francqui-Prize, with Laurens Cherchye and Bram De Rock.