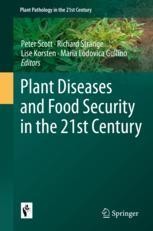 Plant Diseases and Food Security in the 21st Century

Of the global population of more than 7 billion people, some 800 million do not have enough to eat today. By 2050, the population is expected to exceed 9 billion. It has been estimated that some 15% of food production is lost to plant diseases; in developing countries losses may be much higher.

Historically, plant diseases have had catastrophic impact on food production. For example: potato blight caused the Irish famine in 1845; brown spot of rice caused the Great Bengal Famine of 1943; southern corn leaf blight caused a devastating epidemic on the US corn crop in 1970. Food security is threatened by an ongoing sequence of plant diseases, some persistent for decades or centuries, others more opportunistic. Wheat blast and banana xanthomonas wilt are two contrasting examples of many that currently threaten food production. Other emerging diseases will follow. The proposed title aims to provide a synthesis of expert knowledge to address this central challenge to food security for the 21st century.

Peter Scott is a retired plant pathologist with a research background in plant disease resistance. Based for 20 years at the former Plant Breeding Institute, Cambridge, UK he was part of a team of pathologists and breeders focused on management of cereal diseases. He then moved into the field of digital knowledge management at CAB International, Wallingford, UK. He led a global programme to develop the encyclopaedic Crop Protection Compendium and then a series of Compendia on forestry, animal health, aquaculture and invasive species. He remains a plant pathologist at heart. He was a Founding Member of the British Society for Plant Pathology (BSPP). He was Chairman of the 1998 International Congress of Plant Pathology, and led the foundation of the Commission on Global Food Security of the International Society for Plant Pathology (ISPP). He has served as President of BSPP and of ISPP.

Richard Strange was attracted to plant pathology by its relevance to food security and its excitement as a subject for research, which he pursued for the majority of his professional life at University College London, publishing over 100 papers and two books. He is a Fellow of the International Society for Plant Pathology (ISPP) and has been involved in numerous overseas projects, several of which were located in African countries. He has supervised Ph.D. students from these and other countries of the developing world in topics directly concerned with plant disease problems affecting their food security. After retirement he co-founded, with Peter Scott, ISPP's international journal Food Security, acting as Editor-in-Chief for the first decade of its existence.

Lise Korsten is Professor in the Department of Plant Sciences, Department of Science and Technology, University of Pretoria, and Co-Director of the Centre of Excellence in Food Security where she is responsible for the food safety and regulatory control programmes. She is a chief editor of the journal Crop Protection and Chair of the Commission on Global Food Security of the International Society for Plant Pathology. HHHHer research is centered on postharvest technology and food safety as related to international trade in fresh produce.

Maria Lodovica Gullino has spent her career at the University of Torino, where she is now Vice-Rector for International Affairs, and Professor of Biological and Integrated Plant Disease. She is the founder and Director of AGROINNOVA, the University's research and communication centre for agricultural innovation. Her research interests focus on biological and integrated control of diseases, seed health, crop biosecurity, effect of climate change on plant diseases, and sustainable agriculture. She coordinates a number of international research projects, with special interests in China. She is active in teaching, communication, journalism and the media. She has served as President of the International Society for Plant Pathology (ISPP) and the Italian Society for Crop Protection. She coordinates the ISPP book series Plant Pathology in the 21st Century, of which this volume is the 10th.