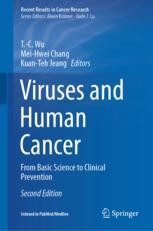 From Basic Science to Clinical Prevention

The book will benefit all those who are seeking a comprehensive, up-to-date overview of the basic and clinical aspects of oncogenic viruses and associated human cancers. Following its original publication in 2014, the first edition of this book quickly became an influential text in the field. This second edition duly reflects the significant advances in knowledge and research that have been achieved in the years since.

Mei-Hwei Chang, MD, is currently the Distinguished Chair Professor at the National Taiwan University College of Medicine. She earned her MD at National Taiwan University College of Medicine and completed her Pediatric Gastroenterology Research Fellowship Training at the David Geffen School of Medicine at the University of California, Los Angeles. She has dedicated her career to the natural history, oncogenesis, and prevention of chronic hepatitis B virus (HBV) infection and liver cancer from infancy to adulthood. Her studies provide evidence to demonstrate efficacy of the HBV vaccine, as the first cancer-preventive vaccine in humans. She is devoted to promoting the concept of cancer-preventive vaccines and has published more than 400 original and review articles and book chapters. In addition, she was a co-editor of the first edition of this book, Viruses and Human Cancer—From Basic Science to Clinical Prevention, published in 2014.

Kuan-Teh (KT) Jeang, MD, PhD, completed his MD and PhD at the Johns Hopkins University School of Medicine. He then joined the National Institutes of Health (NIH), where he worked until his sudden death in 2013. He was Chief of the Molecular Virology Section of the National Institute of Allergy and Infectious Disease (NIAID) Laboratory of Molecular Microbiology and a renowned virologist. His work focused on gene regulation of the human immunodeficiency virus (HIV) and human T-cell lymphotropic virus type 1 (HTLV-1) pathogenesis and oncogenesis, and he contributed more than 300 publications to the field. He was the co-founder and editor-in-chief of the academic journal Retrovirology and served as an editor for several other scientific journals, including Cancer Research. Notably, he was a co-editor for the first edition of this text. To honor his many contributions to the first edition of Viruses and Human Cancer, and to the field of virology as a whole, we have chosen to recognize the late KT Jeang as a co-editor on this second edition.