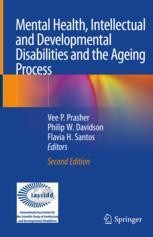 Mental Health, Intellectual and Developmental Disabilities and the Ageing Process

This book brings together findings from research and clinical practice, with comprehensive coverage of the important aspects of mental health in ageing persons with intellectual and developmental  disabilities. It is crucial for professionals involved in the care of persons with all intellectual  and developmental  disabilities to have a broad understanding of the essential range of issues, and therefore this book provides a truly multi-disciplinary perspective, complete with many figures and illustrations to underline the key points.

Undoubtedly, research and clinical practice are much more advanced in the general ageing population than in persons with intellectual and developmental disabilities, and so professionals and academics must be made fully aware of commonalities and idiosyncrasies of older people with intellectual and developmental disabilities. This book presents the ongoing developments concerning mental health and aging, which will become relevant to the intellectually disabled population. Through experience, this book also acknowledges that the impact on the persons themselves and on their carers always needs to be taken into account, with treatment programs established with a multi-faceted team approach in mind.

Avoiding the jargon of many titles in this area while maintaining the hands-on approach of clinical practice, this book meshes the practical and scientific worlds, with all chapters written by leading experts in the field.

Beyond the US, the IASSIDD support expands the book message worldwide.

Flavia H. Santos, PhD, is Assistant Professor in Psychology at the University College Dublin in Ireland and Deputy Director of the UCD MSc in Rehabilitation and Disability Studies at the UCD Centre for Disability Studies. Dr Santos was awarded the prestigious UCD Ad Astra Fellow in Psychology 2019-2024. She is a researcher on secondment under the Marie Skłodowska-Curie Action Research and Innovation Staff Exchange (RISE) programme for the CareHD project, focused on Huntington’s Disease. Dr Santos is a member of the ACRM Neurodegenerative Diseases Networking Group and the ACRM Geriatric Rehabilitation Networking Group. She also serves as Executive Member of the International Association for the Scientific Study of Intellectual and Developmental Disabilities (IASSIDD) Comparative Policy and Practice 'Special Interest Research Group'