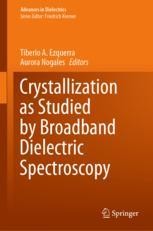 Tiberio A. Ezquerra is a native of Zaragoza (Spain) in whose university he obtained a degree in Physical Sciences in 1982. He completed his doctoral thesis in Madrid at the Institute of Structure of Matter (IEM_CSIC) of the Higher Council for Scientific Research (CSIC) in 1986, and later he spent a period of two years at the Max-Planck-Institut für Polymerforschung in Mainz (Germany). Since 1988, he is a Staff Scientist of the CSIC, from 1996 to 2009, he has been Head of the Department of Macromolecular Physics of the Institute of Structure of Matter, and since September 2009, he is Vice Director of the Institute of Structure of Matter. In April 2009, he was promoted to Research Professor of the CSIC. He has been a Visiting Scientist at the “Institut für Makromolekulare Chemie” at the University of Hamburg (Germany) and at the “Department of Material Science and Engineering” of the University of Utah (USA). He has been Co-Founder of the Group of Physics of Condensed Soft and Polymeric Matter in the IEM-CSIC. He has published more than two hundred scientific articles in international journals, and he is Co-Inventor of four patents. He has been Co-Chair of the Sixth International Meeting of Dielectric Spectroscopy (BDS2010) held in Madrid in 2010 and of the sixth meeting Polymers and Synchrotron Radiation (SRPS5) held also in Madrid in 2015. He has been a member of different international committees, among which the “Scientific Advisory Committee (SAC)” of the French Synchrotron (SOLEIL), Paris, France, (2006–2009), the “Scientific Council “of the” Institut Laue-Langevin (ILL)” Grenoble, France, (2009–2013) and the “Scientific Advisory Committee” (SAC) of the Spanish Synchrotron ALBA(2018–up to date, Cerdanyola del Vallès, Spain).

Aurora Nogales was born in Madrid where she accomplished her first degree in Physics in 1994 and her Ph.D. in Physics in 1999 working at the Institute of Structure of Matter, IEM-CSIC. Later she spent a postdoctoral period in the State University of New York at Stonybrook (USA) and in the University of Reading, in the UK, under the support of the Fullbright Foundation and of the European Union (Marie Curie Individual Fellowship), respectively. She is Staff Scientist at the IEM-CSIC since 2007.  In 2016, she was Visiting Scientist in the Center for Functional Nanomaterials of Brookhaven National Lab (New York, USA) sponsored by the Fullbright Commission. She is the author of more than hundred articles in ISI magazines, several book chapters, Co-Editor of a book by Editorial Springer and has directed several Ph.D. theses doctorates.  She has been Co-Chair of the Sixth International Meeting of Dielectric Spectroscopy (BDS2010) held in Madrid in 2010 and of the sixth meeting Polymers and Synchrotron Radiation (SRPS) held also in Madrid in 2015. He has also organized several national and international congresses and workshops. She has been Deputy Director of the IEM-CSIC between 2008 and 2009 and Head of the Department of Physics Macromolecular of this Institute between 2010 and 2013. She has been a member of the proposal review committee for access to the BM26 line of the European Synchrotron ESRF and member of the review panel of the spectroscopy group of the neutron spallation source ISIS in the UK (2010–2015), and she was until 2019 a member of College 9: Soft Matter for the selection of proposals for the neutrons source of the Institut Laue–Langevin (France).