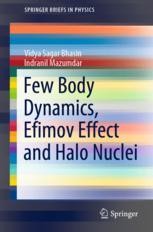 This book presents an overview of the different few-body techniques developed in nuclear physics and their applications to explore the structural properties of neutron-rich unstable nuclei, the so-called halo nuclei. Formal theory of two- and three-body scattering are discussed in a compact and abridged form to initiate the beginners who want to investigate the problems of halo nuclei within the framework of three-body models.  Readers gain in-depth knowledge about the methods involved to solve the two- and three-body scattering problem and a special focus is put on the Faddeev approach.  In this sense, the authors address both the graduate students and senior researchers. Subsequently, a detailed analysis of the Efimov effect in three-body systems is presented and the search for the effect in atomic nuclei, both Borromean and non-Borromean is addressed. The book also presents a detailed account of how to analyze, within the framework of a 3-body approach and using realistic short range forces, the structural properties of halo nuclei. Finally, the authors discuss the recent progress in effective field theory by setting up the integral equations for 3-body scattering and applying it to study low energy scattering of neutrons off halo nuclear targets.

Vidya Sagar Bhasin received his Ph.D in theoretical nuclear physics from University of Delhi, working on the problem of nuclear three body scattering at low energies.  He has spent extended periods at ICTP, Trieste, SLAC, Stanford University, T.W. Bonner Nuclear Lab, Rice University, University of Manitoba, Winnipeg at different times as post-doctoral fellow and visiting scientist. He has been Alexander von Humboldt Fellow at the University of Bonn.  He taught and carried out research at the Department of Physics and Astrophysics, University of Delhi for nearly four decades.  His research interests have been in non-relativistic and relativistic three-body nuclear physic, high energy scattering problems, meson-baryon physics in quark model, charge symmetry breaking effect in nucleon-nucleon scattering, few-body analysis of structural properties of neutron-rich halo nuclei and search for Efimov effect in nuclei.  He has edited several volumes on some of these topics and has authored several books on science and technology for the National Centre for Education Research and Training (NCERT, Govt. of India).

Indranil Mazumdar is professor of nuclear physics at the Tata Institute of Fundamental Research (TIFR), Mumbai.  He studied physics at Delhi University for both his bachelor and master degrees.  He received his Ph.D in nuclear physics from Delhi University having worked jointly at Delhi University and Inter University Accelerator Centre (Formerly Nuclear Science Centre ), New Delhi.  He did his post-doctoral work at the State University of New York at Stony Brook, and later spent extended period on sabbatical at the Duke University, North Carolina. His research interests cover both theoretical, phenomenological calculations, experiments and instrumentation. His primary activities include few-body calculations of neutron-rich halo nuclei, Efimov effect, shape-phase transitions in hot and rotating nuclei, giant resonances, fusion-fission dynamics, nuclear level density, reactions of nuclear astrophysics and Big Bang Nucleosynthesis.