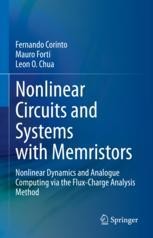 Nonlinear Circuits and Systems with Memristors

Nonlinear Dynamics and Analogue Computing via the Flux-Charge Analysis Method

This book presents a new approach to the study of physical nonlinear circuits and advanced computing architectures with memristor devices. Such a unified approach to memristor theory has never been systematically presented in book form.

This analysis method reveals new peculiar and intriguing nonlinear phenomena in memristor circuits, such as the coexistence of different nonlinear dynamical behaviors, extreme multistability and bifurcations without parameters.

The book also describes how arrays of memristor-based nonlinear oscillators and locally-coupled neural networks can be applied in the field of analog computing architectures, for example for pattern recognition.

The book will be of interest to scientists and engineers involved in the conceptual design of physical memristor devices and systems, mathematical and circuit models of physical processes, circuits and networks design, system engineering, or data processing and system analysis.

Fernando Corinto received the Masters' Degree in Electronic Engineering and the Ph.D. degree in Electronics and Communications Engineering from the Politecnico di Torino, in 2001 and 2005 respectively. He also received the European Doctorate from the Politecnico di Torino, in 2005. Prof. Corinto was awarded a Marie Curie Fellowship in 2004. He is currently Full Professor of Electrical Engineering with the Department of Electronics and Telecommunications, Politecnico di Torino. His research activities are mainly on nonlinear dynamical circuits and systems, complex/neural networks and memristor nanotechnology. Prof. Corinto is author of 2 books, 7 book chapters and more than 150 international journal and conference papers. Since 2010, he is Senior Member of the IEEE. He is also Member of the IEEE CAS Technical Committees on “Cellular Nanoscale Networks and Array Computing” and “Nonlinear Circuits and Systems”. Prof. Corinto served as Vice-Chair of the IEEE North Italy CAS Chapter. Prof. Corinto has been Associated Editor of the IEEE Trans. on Circuits and Systems - I for 2014-2015. He is also in the Editorial Board and Review Editor of the International Journal of Circuit Theory and Applications since January 2015. Prof. Corinto has been the Vice Chair of the COST Action “Memristors - Devices, Models, Circuits, Systems and Applications (MemoCiS)”. Prof. Corinto has been DRESDEN Senior Fellows at the Technische Universität Dresden in 2013 and 2017. Prof. Corinto is also August-Wilhelm Scheer visiting professor at Technische Universität München and member of the Institute for Advanced Study -Technische Universität München.

Mauro Forti received the Laurea degree in Electronics Engineering (cum laude) from the University of Florence, Italy. From 1991 to 1998 he has been assistant professor at the Department of Electronics Engineering of the University of Florence, Italy, where he taught courses on circuit theory and applied mathematics. In 1998 he joined the Department of Information Engineering and Mathematics of the University of Siena, Siena, Italy, where he is currently Professor of Electrical Engineering. The main scientific interests are in nonlinear circuit theory and neural networks, with emphasis on the qualitative properties of the nonlinear dynamics (convergence, oscillation and complex behaviors) of large scale systems, and the analysis and design of circuits containing new nanoscale components as memristors. His research interests also include aspects of electromagnetic compatibility. He is author of more than 100 international publications (77 in international journals, 41 of which in transactions of the IEEE). He has served as Associate Editor of the IEEE Transactions on Neural Networks and the IEEE Transactions on Circuits and Systems-I: Fundamental Theory and Applications. He is currently serving as Associate Editor of the IEEE Transactions on Cybernetics, Neural Networks (Elsevier) and Frontiers in Neuroscience. Prof. Forti cooperates as a reviewer with several international journals on topics concerning nonlinear dynamics of circuits and systems.