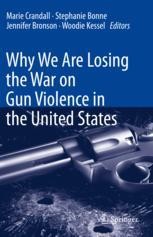 This edited collection of data and perspectives takes a fresh approach to gun violence prevention by addressing the question, “why are we losing the war on gun violence in America?” Although successes and failures in the prevention of gun violence are examined, it is a war we are losing, due to restrictions on research funding, entrenched historical perspectives, structural violence, and perhaps differing priorities or views on what is right or wrong.
Gun violence is a public health crisis. It remains politicized and has been paralyzed with inaction. In the chapters, the authors write candidly about the challenges that have thwarted gun violence prevention, as well as highlight possible strategies for progress to save lives. Critical areas explored among the chapters include:

With this compendium, the editors and authors hope to bridge the growing gap between groups or ideologies, and create common ground to discuss workable solutions. Why We Are Losing the War on Gun Violence in the United States is essential reading for a broad audience including practitioners, academics, researchers, students, policy-makers, and other professionals in public health, behavioral sciences (including social work and psychology), social sciences, health sciences, public policy, political science, and law, as well as any readers interested in the path to decreasing gun violence in America.
Show all
About the authors

Marie Crandall, MD, MPH, FACS, is Professor of Surgery at the University of Florida (UF) College of Medicine Jacksonville, Associate Chair for Research for the Department of Surgery, and Program Director for the General Surgery residency. She is originally from Detroit, Michigan, a product of Head Start and local public schools. Dr. Crandall obtained a Bachelor’s Degree in Neurobiology from University of California, Berkeley, and attended medical school at the Charles R. Drew/UCLA program in Los Angeles. She finished her General Surgery residency at Rush University and Cook County Hospital in Chicago, Illinois, in 2001. In 2003, Dr. Crandall completed a Trauma and Surgical Critical Care Fellowship at Harborview Medical Center in Seattle, Washington, where she also obtained a Master’s in Public Health from the University of Washington. She spent 12 years at Northwestern University in Chicago, where she held faculty appointments in both Surgery and Preventive Medicine.  She is currently a member of the Division of Acute Care Surgery at UF-Jacksonville. Dr. Crandall performs emergency general and trauma surgery, staffs the SICU, and is an active health services researcher. She has nearly 200 peer-reviewed research publications and more than 200 other publications in the areas of gun violence, injury risk factors and outcomes, disparities, geographic information systems in trauma research, and violence prevention. Her research has been funded internally and externally with almost no gaps since 2006 and now totals more than $2 million. Dr. Crandall is nationally known as a traumatic injury and gun violence expert.

Stephanie Bonne, MD, FACS, is an Associate Professor of surgery in the division of Trauma and Surgical Critical Care at Rutgers New Jersey Medical School in Newark, and practices trauma and critical care surgery at University Hospital. She is the medical director of the center’s Hospital Violence Intervention Program, and the surveillance core director of the New Jersey Center on Gun Violence Research at Rutgers University.
Dr. Bonne serves on multiple violence working groups in her role as a state vice chair for the American College of Surgeons Committee on Trauma. She serves as the co-chair of the American Medical Women’s Association Gun Violence Prevention Task Force, co-chair of the APHA’s Public Health Partnership for the Prevention of Firearm Violence, and is on the research advisory board of the American Foundation for Firearm Reduction in Medicine (AFFIRM). Dr. Bonne is currently a Robert Wood Johnson Clinical Scholar, has been awarded the Claude Organ Traveling Fellowship of the American College of Surgeons, is a graduate of the Future Leaders in Trauma Program, and has been awarded the Eastern Association for the Surgery of Trauma’s John M. Templeton, Jr., MD Injury Prevention Research Scholarship and multicenter research scholarship.
Dr. Bonne holds a BA in psychology and biochemistry from Kalamazoo College in Michigan; an MD from Rosalind Franklin University of Medicine and Science in North Chicago, Illinois; completed general surgery residency at the University of Illinois Metropolitan Group in Chicago; and fellowships in surgical critical care and trauma at Washington University in St. Louis, Missouri. She is board certified in general surgery and surgical critical care and is a Fellow of the American College of Surgeons and the American Medical Women’s Association.
Jennifer Bronson, PhD, is a founding member and co-chair of American Public Health Association’s (APHA) Maternal and Child Health (MCH) Gun Violence Prevention Workgroup, formed in 2013. She has over eight years of experience researching exposure to violence, to include maternal mortality due to violence, exposure to violence among African American young adults, and the National Survey of Children’s Exposure to Violence. She has additional expertise in behavioral health and incarceration. Over her career, Dr. Bronson has worked for a community-based re-entry services center, two HBCUs, and the U.S. Department of Justice, where she was a correctional health statistician for five years. Currently, she is Senior Director of Research for a national non-profit research firm focused on reducing the number of people with mental illness and substance use disorders from criminal justice involvement. Dr. Bronson has a PhD in Sociology from Howard University in Washington, DC, and a BS and MS in Sociology from Virginia Commonwealth University in Richmond.
Woodie Kessel, MD, MPH, is a pediatrician and advocate for children and families, public-private enterprise, diversity, and achieving human potential.  He is an experienced educator, investigator, and practitioner in medicine, public health, bioengineering, community-based initiatives, and public policy for over four decades.  Dr. Kessel is Professor of the Practice at the University of Maryland’s School of Public Health and the C. Everett Koop Institute Senior Child Health Scholar and Professor of Pediatrics, Geisel School of Medicine, Dartmouth College in Hanover, New Hampshire.  Dr. Kessel served in the U.S. Public Health Service as an Assistant Surgeon General and senior advisor to the White House, Cabinet Secretaries, Surgeons General, and Health and Human Services officials spanning eight administrations.  His career has focused on applying public health science to the development and implementation of community-based strategies to improve the health of children and families-Bright Futures and PROS, Military Children’s Initiative; assure health insurance coverage for all children-CHIP; reduce low birthweight and infant mortality-Healthy Start; eliminate racial health disparities-Black & Minority Health Taskforce and HBCU Student Mentor Program; prevent gun violence-GVP National Research Collaboration Summit; eliminate child poverty-State Child Poverty Prevention Boards; stop e-cigarette use among teens-Grandparents Helping Teens; reduce childhood obesity-Healthy Grand Families and Sesame Workshop Healthy Habits for Life™; and advance the science related to the care and cure of rare diseases-Healthy Hearts and MD Advocacy.  He is engaged in teaching public health policy and advocacy, improving maternal and child health, advancing prevention teaching and research, mentoring students in translating science into action, and improving community data systems to solve public health problems in the community.  Dr. Kessel is the recipient of several honors including the C. Everett Koop Courage Award, Vince Hutchins Leadership Award, Ambrose Scholars Award, Albert Einstein College of Medicine Lifetime Achievement Award, USPHS Surgeon General’s Medallion, and USPHS Distinguished Service Medal.