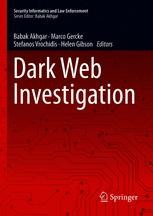 This edited volume explores the fundamental aspects of the dark web, ranging from the technologies that power it, the cryptocurrencies that drive its markets, the criminalities it facilitates to the methods that investigators can employ to master it as a strand of open source intelligence. The book provides readers with detailed theoretical, technical and practical knowledge including the application of legal frameworks. With this it offers crucial insights for practitioners as well as academics into the multidisciplinary nature of dark web investigations for the identification and interception of illegal content and activities addressing both theoretical and practical issues.

Babak Akhgar is Professor of Informatics and Director of CENTRIC (Centre of Excellence in Terrorism, Resilience, Intelligence and Organized Crime Research) at Sheffield Hallam University, UK and Fellow of the British Computer Society. He has more than 130 refereed publications in international journals and conferences on strategic information systems with specific focus on knowledge management (KM) and intelligence management. He is member of editorial boards of several international journals and has acted as Chair and Program Committee Member for numerous international conferences. He has extensive and hands-on experience in the development, management and execution of KM-projects and large international security initiatives (e.g., the application of social media in crisis management, intelligence-based combating of terrorism and organized crime, gun crime, cyber-crime and cyber terrorism and cross-cultural ideology polarization). In addition to this, he acts as technical lead in EU security projects (e.g., the EU H2020-project TENSOR on dark web). He has co-edited numerous books on Intelligence Management; for instance, “Emerging Trends in ICT Security”, “Application of Big Data for National Security”, “Open Source Intelligence Investigation” and “Combatting Cybercrime and Cyberterrorism”. Prof Akhgar is board member of the European Organisation for Security (EOS) and member of the academic advisory board of SAS UK.

Prof Dr Marco Gercke is an entrepreneur, thinker and scientist. With more than 1000 speeches in over 100 countries and over 100 scientific publications, Marco is a leading experts in the field of cybersecurity and cybercrime. He is the founder and director of the Cybercrime Research Institute, an independent research institute. He advises governments, international organizations and large enterprises around the world with regard to strategic, political and legal issues in the field of cybersecurity. Over the past 15 years, he has worked in over 100 countries across Europe, Asia, Africa, the Pacific and Latin America. Marco is involved in various international projects related to Cybersecurity included the EU funded projects TENSOR and FORESIGHT.

Dr Stefanos Vrochidis received the Diploma degree in electrical engineering from Aristotle University of Thessaloniki, the MSc degree in radio frequency communication systems from University of Southampton, and the PhD degree on Interactive video retrieval based on implicit user feedback from Queen Mary, University of London. He is a Senior Researcher with the Multimedia Knowledge and Social Media Analytics Lab at the Information Technologies Institute of the Centre for Research and Technology Hellas (CERTH-ITI). He is also a Research Development Manager and co-founder of Infalia PC. His research interests include multimedia analysis, computer vision, web data mining, semantics, information retrieval, multimodal analytics, decision support, as well as security applications including crisis management, fight crime and terrorism and border surveillance.

Dr Vrochidis has participated in more than 30 National and European projects relevant to ICT and Security in 3 of which he has been the Project Coordinator, in 2 the deputy Project Coordinator and in 4 the Scientific/Technical Manager. He has been the organizer of various workshops relevant to multimodal retrieval, multimedia and security and has served as regular reviewer in several scientific journals and conferences. He is also the co-author of more than 180 conference, journal and book chapter articles.

Dr Helen Gibson is a Senior Research Fellow and Operations Lead within CENTRIC at Sheffield Hallam University. Prior to CENTRIC, Helen studied for her PhD at Northumbria University in graph and network visualisation. Before that she completed a Masters in Computing also at Northumbria and BSc in Mathematics at Edinburgh University. Helen’s main research interests lie in the areas of data science and visualisation with a specific focus on how data can be used and presented to achieve the maximum value and understanding in intelligence operations. Helen has worked on a number of EU funded projects within CENTRIC including Athena, Unity, TENSOR, ROBORDER and CONNEXIONs as well as supporting the development of the open source intelligence capability with CENTRIC.