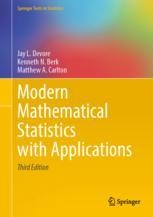 About this Textbook
This 3rd edition of Modern Mathematical Statistics with Applications tries to strike a balance between mathematical foundations and statistical practice.  The book provides a clear and current exposition of statistical concepts and methodology, including many examples and exercises based on real data gleaned from publicly available sources. Here is a small but representative selection of scenarios for our examples and exercises based on information in recent articles: The main focus of the book is on presenting and illustrating methods of inferential statistics used by investigators in a wide variety of disciplines, from actuarial science all the way to zoology.  It begins with a chapter on descriptive statistics that immediately exposes the reader to the analysis of real data.  The next six chapters develop the probability material that facilitates the transition from simply describing data to drawing formal conclusions based on inferential methodology.  Point estimation, the use of statistical intervals, and hypothesis testing are the topics of the first three inferential chapters.  The remainder of the book explores the use of these methods in a variety of more complex settings. This edition includes many new examples and exercises as well as an introduction to the simulation of events and probability distributions.  There are more than 1300 exercises in the book, ranging from very straightforward to reasonably challenging.  Many sections have been rewritten with the goal of streamlining and providing a more accessible exposition.  Output from the most common statistical software packages is included wherever appropriate (a feature absent from virtually all other mathematical statistics textbooks).  The authors hope that their enthusiasm for the theory and applicability of statistics to real world problems will encourage students to pursue more training in the discipline.
Show all
About the authors

Jay L. Devore received a B.S. in Engineering Science from the University of California, Berkeley, and a Ph.D. in Statistics from Stanford University. He previously taught at the University of Florida and Oberlin College, and has had visiting positions at Stanford, Harvard, the University of Washington, New York University, and Columbia. He has been at California Polytechnic State University, San Luis Obispo, since 1977, where he was chair of the Department of Statistics for seven years and recently achieved the exalted status of Professor Emeritus.

Kenneth N. Berk has a B.S. in Physics from Carnegie Tech (now Carnegie Mellon) and a Ph.D. in Mathematics from the University of Minnesota. He is Professor Emeritus of Mathematics at Illinois State University and a Fellow of the American Statistical As­sociation. He founded the Software Reviews section of The American Statistician and edited it for six years. He served as secretary/treasurer, program chair, and chair of the Statistical Computing Section of the American Statistical Association, and he twice co-chaired the Interface Symposium, the main annual meeting in statistical computing. His published work includes papers on time series, statistical computing, regression analysis, and statistical graphics, as well as the book Data Analysis with Microsoft Excel (with Patrick Carey).

Matthew A. Carlton is Professor of Statistics at California Polytechnic State University, San Luis Obispo, where he joined the faculty in 1999. He received a B.A. in Mathematics from the University of California, Berkeley and a Ph.D. in Mathematics from the University of California, Los Angeles, with an emphasis on pure and applied probability; his thesis research involved applications of the Poisson-Dirichlet random process. Matt has published papers in the Journal of Applied Probability, Human Biology, Journal of Statistics Education, and The American Statistician. He was also the lead content adviser for the “Statistically Speaking” video series, designed for community college statistics courses, and he has published a variety of educational materials for high school statistics teachers. Matt was responsible for developing both the applied probability course and the probability and random processes course at Cal Poly, which in turn inspired him to get involved in writing this text. His professional research focus involves applications of probability to genetics and engineering. Personal interests include travel, good wine, and college sports.