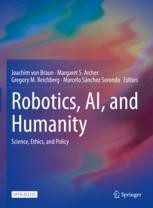 This open access book examines recent advances in how artificial intelligence (AI) and robotics have elicited widespread debate over their benefits and drawbacks for humanity. The emergent technologies have for instance implications within medicine and health care, employment, transport, manufacturing, agriculture, and armed conflict. While there has been considerable attention devoted to robotics/AI applications in each of these domains, a fuller picture of their connections and the possible consequences for our shared humanity seems needed. This volume covers multidisciplinary research, examines current research frontiers in AI/robotics and likely impacts on societal well-being, human – robot relationships, as well as the opportunities and risks for sustainable development and peace. The attendant ethical and religious dimensions of these technologies are addressed and implications for regulatory policies on the use and future development of AI/robotics technologies are elaborated.

Joachim von Braun is Director of the Center for Development Research (ZEF), Bonn University, and Professor for economic and technological change. He received his doctoral degree in agricultural economics from the University of Goettingen, Germany. His research is on economic development, science and technology policy, poverty reduction, food and nutrition security, resource economics and trade. von Braun is President of the Pontifical Academy of Sciences of the Vatican; member of German National Academy of Science - Leopoldina, Academy of Science and Engineering (acatech), Academy of Arts and Science North Rhine-Westphalia, fellow of African Academy of Science and of American Association for the Advancement of Sciences. From 2002 to 2009, he was director general of the International Food Policy Research Institute (IFPRI) based in Washington DC. He was president of the International Association of Agricultural Economists (IAAE).

Margaret S. Archer has a PhD from London School of Economics, is a sociologist, who spent most of her academic career at the University of Warwick, UK, where she was Professor of Sociology. She was also a professor at l'Ecole Polytechnique Fédérale de Lausanne, Switzerland. Professor Archer served as President of the Pontifical Academy of Social Sciences until 2019. She was President of the International Sociological Association 1986-90. Her research is in the area of philosophy of social science. It has fundamentally been concerned with the "problem of structure and agency", that is with justifying these as irreducible entities with their own emergent properties and powers. She is working on the manner in which human reflexivity serves to mediate between our personal concerns and our structural conditioning as the next stage in the above project.

Gregory M. Reichberg is Research Professor at the Peace Research Institute Oslo (PRIO) and Adjunct Professor in the Department of Political Science at the University of Oslo. He heads the Oslo-based Research School on Peace and Conflict (a consortium that offers doctoral courses) and is an associate editor of the Journal of Military Ethics. Reichberg leads Warring with Machines: Military Applications of Artificial Intelligence and the Relevance of Virtue Ethics, a four-year project funded by the Research Council of Norway's Research Programme on the Cultural Conditions Underlying Social Change. He is author of Thomas Aquinas on War and Peace, which was named an “outstanding academic title 2017” by Choice Magazine.

Marcelo Sánchez Sorondo is Chancellor of the Pontifical Academy of Sciences and of the Pontifical Academy of Social Sciences since 1998. He is retired Professor of the History of Philosophy, Libera Università Maria SS. Assunta (1998-2015). Ordained Bishop by His Holiness John Paul II on 19 March 2001, he is member of the Pontifical Academy of St. Thomas Aquinas (1989) and was Secretary Prelate (1999-2017); Member of the Accademia dei Georgofili (2008); Member of Academy of Sciences of Cuba (2009); Member of the Accademia Italiana del Vino (2010); Member of the Académie Catholique de France (2011). His early work centred around an innovative examination of the primary function of the idea of participation in the core theological approach of St. Thomas Aquinas. Drawing upon the most recent developments in critical research into the structure of the thought of Aristotle, Sánchez Sorondo examined the different interpretations of this philosopher, especially those propounded during the medieval period by Thomas Aquinas and during the modern era by Hegel.