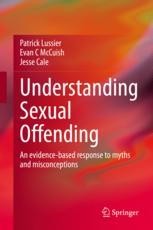 An evidence-based response to myths and misconceptions

Addressing common myths and misconceptions about sexual offending, this book highlights the current state of scientific knowledge about the origins and the development of sexual offending. It offers a critical overview of current criminal justice policies and close to 100 years of research on how to best improve these policies through theoretically-grounded and methodologically-rigorous research.

Patrick Lussier is a Full Professor of criminology at the School of social work and criminology at Université Laval, in Quebec city, Canada. After completing a Ph.D. in criminology at the University of Montreal, he completed postdoctoral studies at the Institute of Criminology at the University of Cambridge under the supervision of Prof. David P. Farrington. He was Professor at the School of Criminology at Simon Fraser University for 8 years. Professor Lussier is currently a regular researcher at the International Center for Comparative Criminology (CICC). His field of expertise is at the intersection of criminology and criminal justice and includes, among other things, the etiology of antisocial and criminal behavior, sexual offending, risk assessment and management as well as quantitative research methods. He has published five books and about 150 publications, including several scientific articles in leading criminology/criminal justice scientific journals, including Criminology, Criminal Justice and Behavior, Justice Quarterly, Journal of Interpersonal Violence, Psychology, Public Policy & Law, Sexual Abuse: A Journal of Research and Treatment. Professor Lussier is the Editor-in-chief of the Canadian Journal of Criminology and Criminal Justice and a member of the editorial board of the Journal of Criminal Justice. He has also been a member of the American Society of Criminology for more than fifteen years. In 2005, Professor Lussier received the Academic Gold Medal from the Governor General of Canada for the excellence of his doctoral dissertation on the origins and the development of sexual aggression.

Evan McCuish received his PhD in Criminology in 2016. He is currently an Assistant Professor at Simon Fraser University, in Burnaby, Canada. He is the Principal Investigator of the Incarcerated Serious and Violent Young Offender Study, which is a longitudinal study on young offenders in Canada followed through adulthood. His research interests include criminal careers, desistance, developmental criminology, foster care, gang involvement, psychopathy, sexual offending, and violence. His work is published in Psychological Assessment, Crime and Delinquency, Sexual Abuse, Justice Quarterly, and Journal of Quantitative Criminology. He is on the Editorial Boards of the Journal of Criminal Justice and Youth Violence and Juvenile Justice. He is the recipient of the Simon Fraser University Dean’s Convocation Medal for Academic Excellence, the American Psychology-Law Society Outstanding Dissertation Award, and the American Society of Criminology Division of Developmental and Life Course Criminology Early Career Award.

Jesse Cale is an Associate Professor of Criminology in the School of Criminology and Criminal Justice at Griffith University in the Gold Coast, Australia. He completed his PhD in 2010 at Simon Fraser University in Canada and was awarded the Governor General of Canada Academic Gold Medal for his doctoral studies. Following his Ph.D. he was awarded a prestigious research fellowship with the Griffith Youth Forensic Service, a clinic that provides treatment for youth who have committed sexual offences, at Griffith University in Brisbane, Australia. His main areas of research involve the causes and consequences of sexual violence, developmental criminology and criminal justice policy and evaluation. He is a Chief Investigator on several large-scale research grants in Australia funded by the Australian Research Council and different state governments and agencies examining the development of delinquency and criminal offending and the effectiveness of criminal justice policy responses. He has published his research in leading international criminology and criminal justice books, and journals such as: Sexual Abuse, the Journal of Criminal Justice, Aggression and Violent Behavior, the Journal of Interpersonal Violence, and Youth Violence and Juvenile Justice. He is a member of the American Society of Criminology, the Australia and New Zealand Society of Criminology, and serves on the editorial boards of the Journal of Developmental and Life-Course Criminology. the Canadian Journal of Criminology, and Victims and Offenders. He was recently a Visiting Scholar at the Institute of Criminology at Cambridge University.